I made them out of clay

With the boards made, I moved to the housing.  My plan for these earrings was to assemble the case using typical methods for crafting jewelry.  Namely, Sculpey. 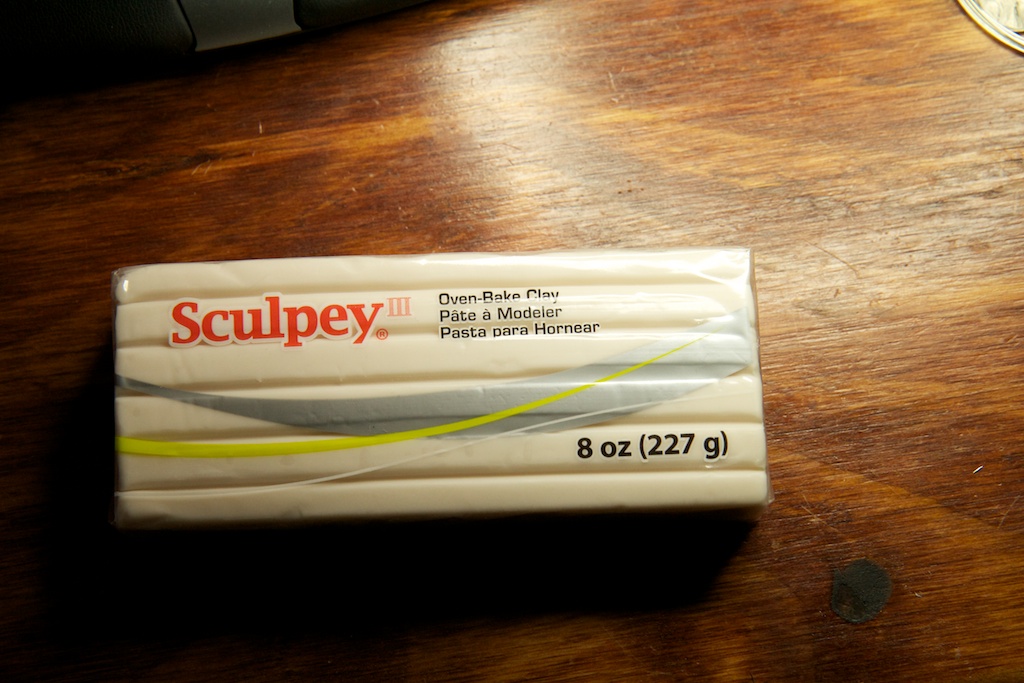 Sculpey or "polymer clay" is a synthetic clay product that can be cured in a conventional oven without the need of a special kiln.  I really liked it as an option for a number of reasons:

This last bullet came as something of a surprise to me.  The original plan for the earrings was to make the case out of Sculpey and then provide some kind of semi-translucent window for the LEDs on the front.  It took me a while to come up with the phrase "flat glass gems" (in case you were wondering what these are called) which I thought were the perfect candidate for my window until I realized how heavy they are.

I decided to start playing with the Sculpey before heading to the craft store.  I made a bead of Sculpey and cut a cube out of the center using an X-acto knife: 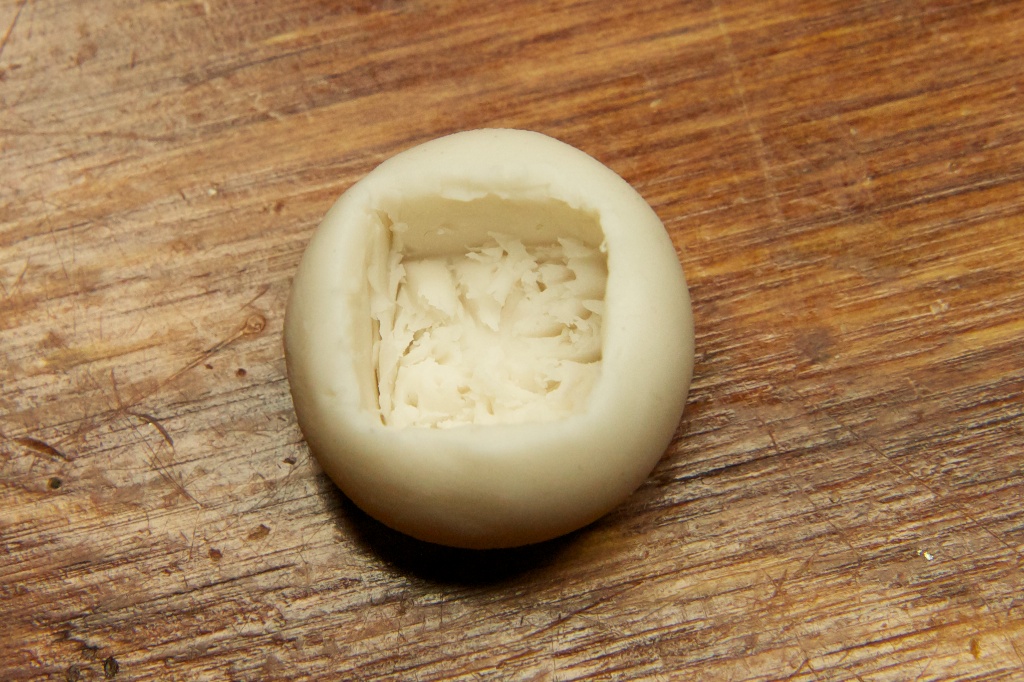 The plan was to drop the circuit in like this: 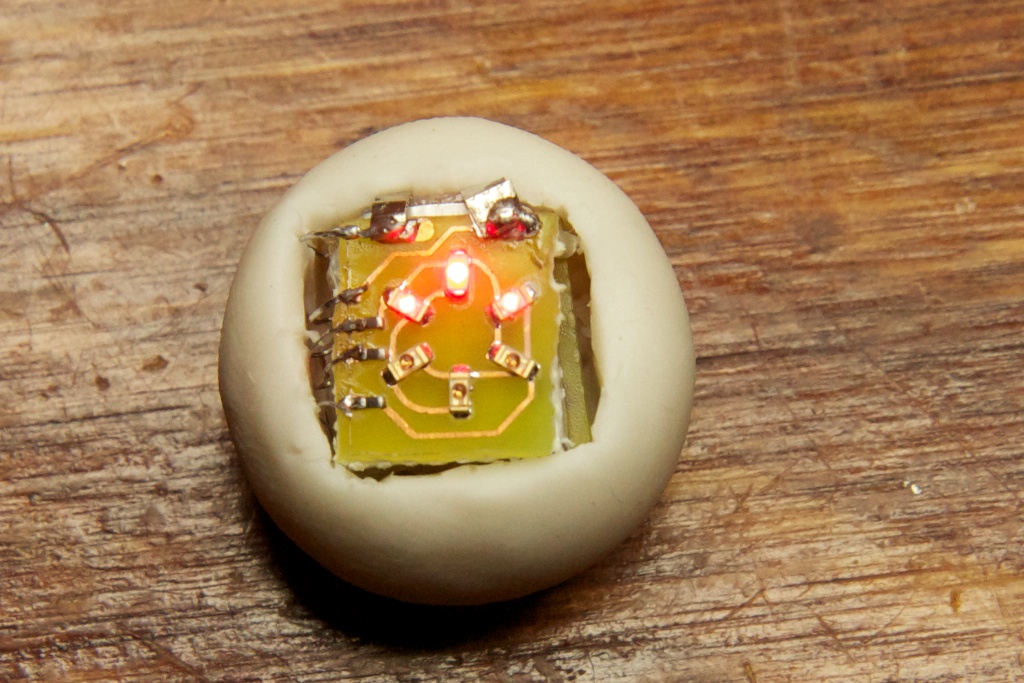 But I immediately noticed how well the light traveled through the translucent Sculpey and decided to turn it around: 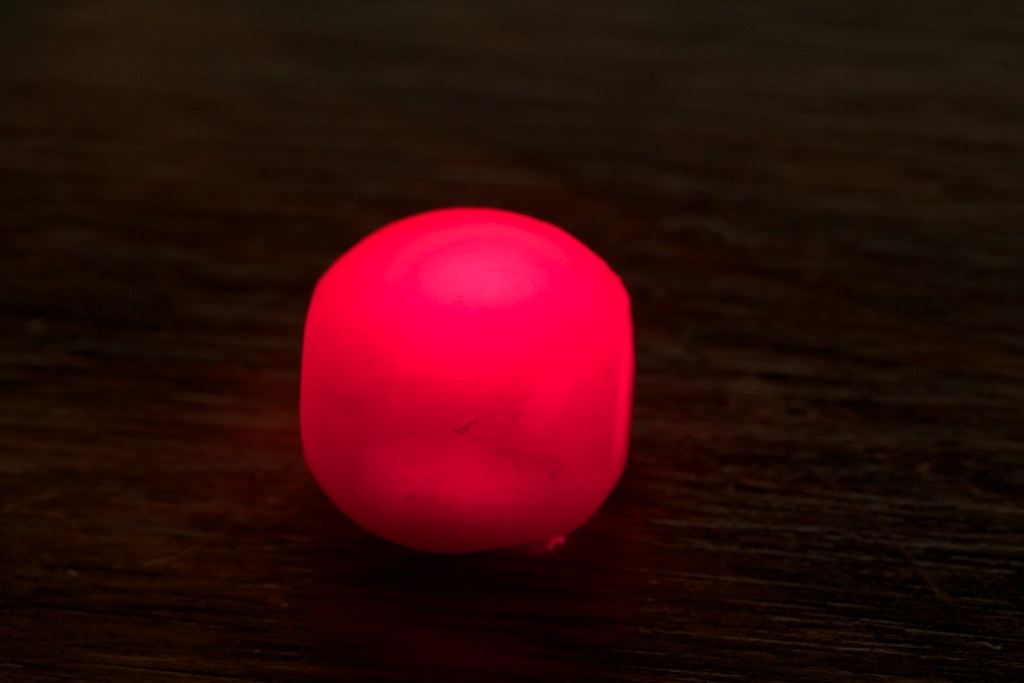 In addition to alleviating my window problem, flipping the board around added a new design element known as "dead fronting".  This is a technique often used in old VCR clock displays and some more modern gadgets like the Nike FuelBand. The idea is that the display is there when you want it, but you can't see any trace of it when it's turned off.  It's a cool way of hiding the technology away from the user.

This is especially cool for my design because people aren't expecting a circuit inside a pair of earrings, so I wanted to make them as innocuous as possible when switched off.

Happy with the shape, I baked the clay for 20-30 minutes at 275F (the website recommends 15 minutes for every 1/4" of clay).  To tweak the aesthetic and lighten the load a bit, I used an X-acto knife to cut around the sphere making it look a little more like a cube with rounded edges.

Next up was the charging ports.  I'll go into details later, but I needed two electrical connections to the outside world to enable charging.  For one of these, I used a small loop of wire stopped off with a blob of solder and threaded through a small hole that I drilled in the top.  This doubled as a loop for the ear hook.

For the bottom contact, I cut the head off a screw with my Dremel tool and soldered a wire to it: 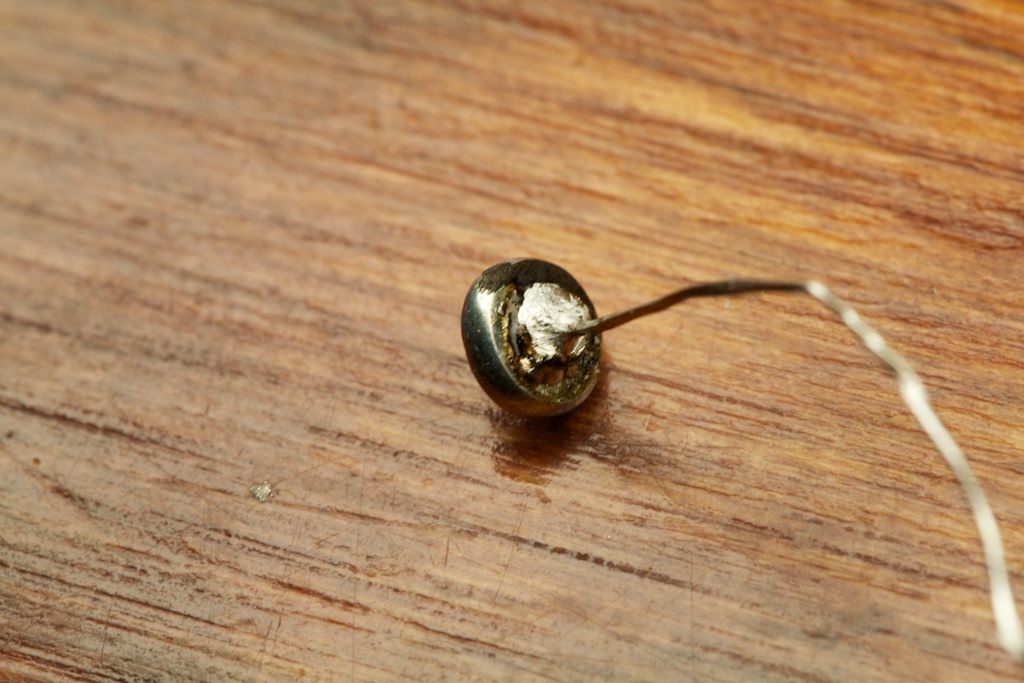 The advantage of the screw head is that it's ferromagnetic, so a charging wire can connect to it with a magnet.  The top loop can be grabbed by an alligator clip. 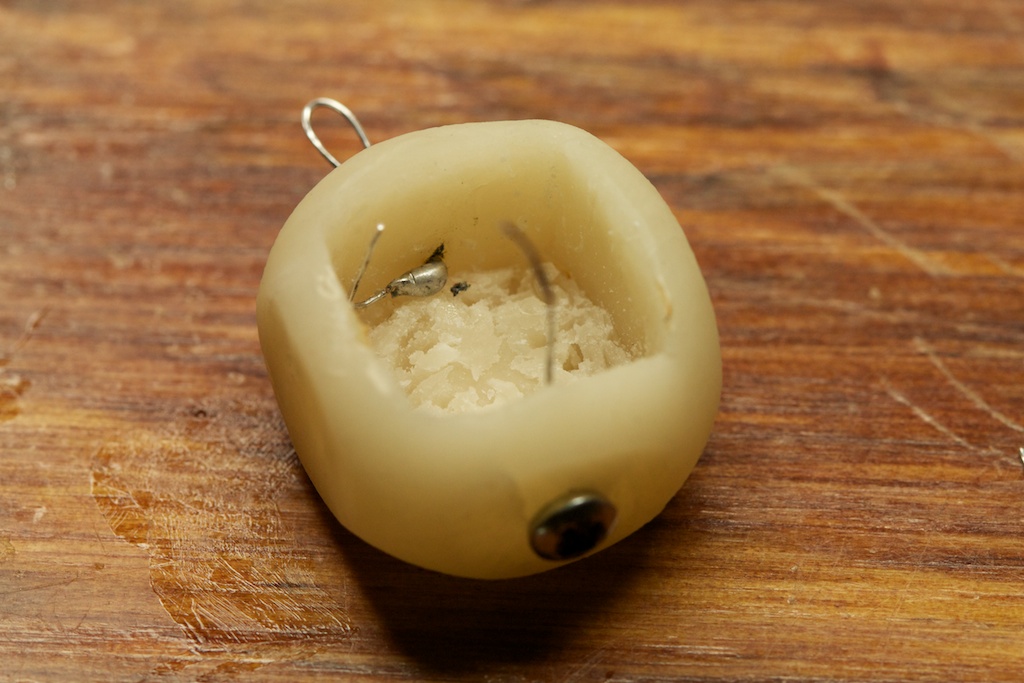 With that out of the way, I tucked in my little circuit and soldered in the appropriate connections to the back of the PCB. 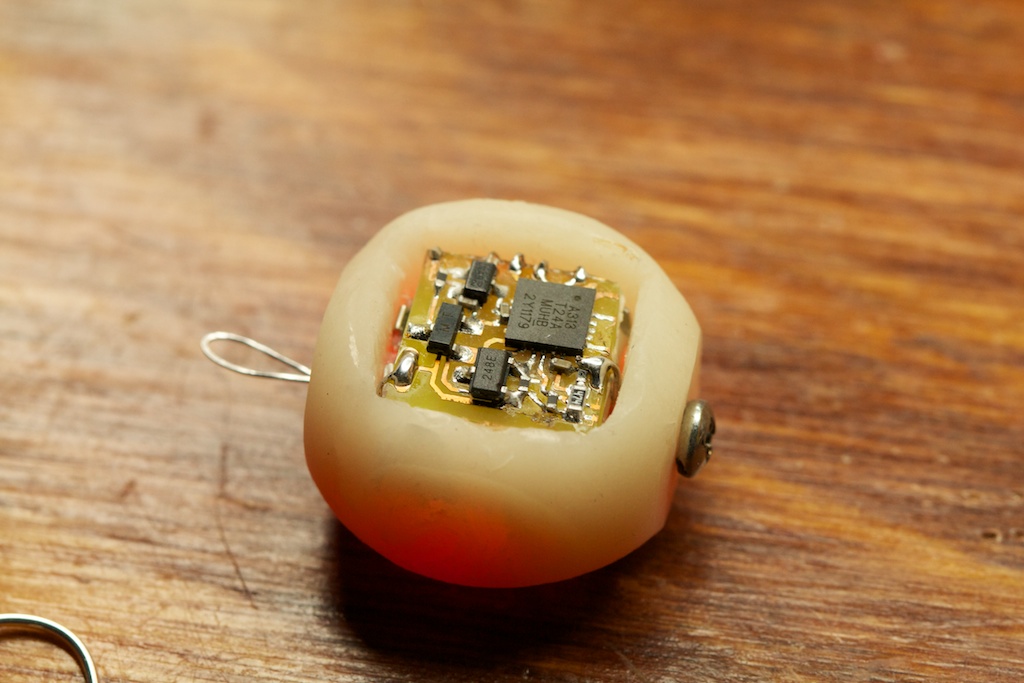 I then made a matching door which was baked separately and finagled into place by cutting around the edges until it fit: 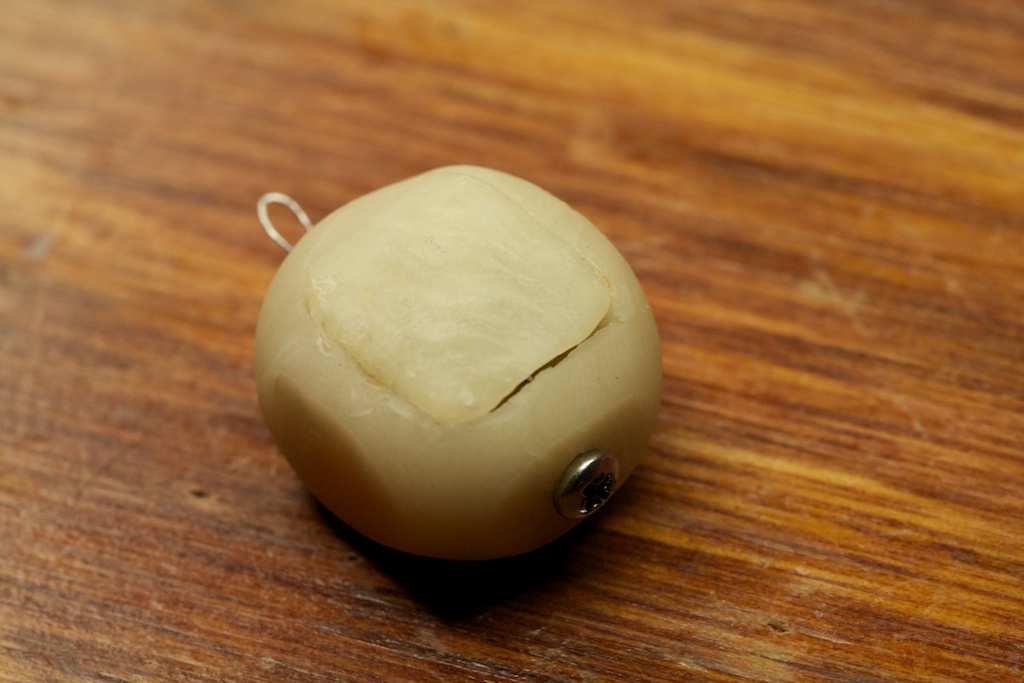 Despite my best efforts, it still wasn't a perfect fit, so I held it in place with some super glue and sealed around the edges with extra Sculpey: 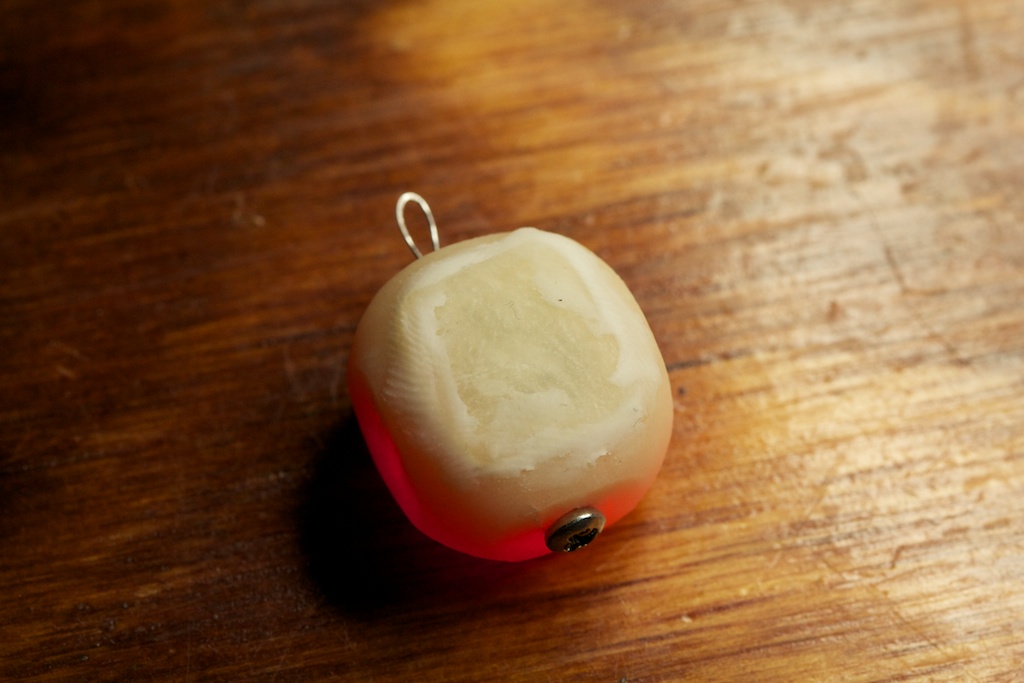 I then baked the Sculpey in place using my hot air gun set on 275F.  Although this hardened the Sculpey, it didn't do a very good job of hiding the door.  The convection of the hot air gun heated the Sculpey too quickly and unevenly.  You can see what I mean in the picture below: 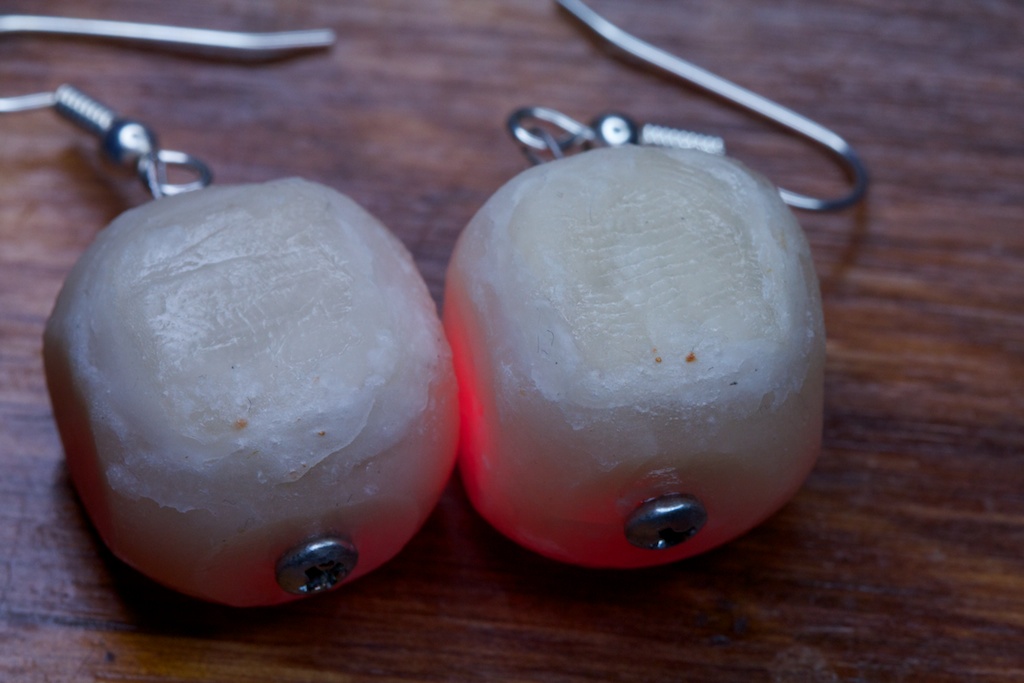 I would have loved to throw the whole thing in the oven and bake it all at once, but sadly 275F is just a little too toasty for the battery.

Curious about how much they weighed, I threw them on a scale: 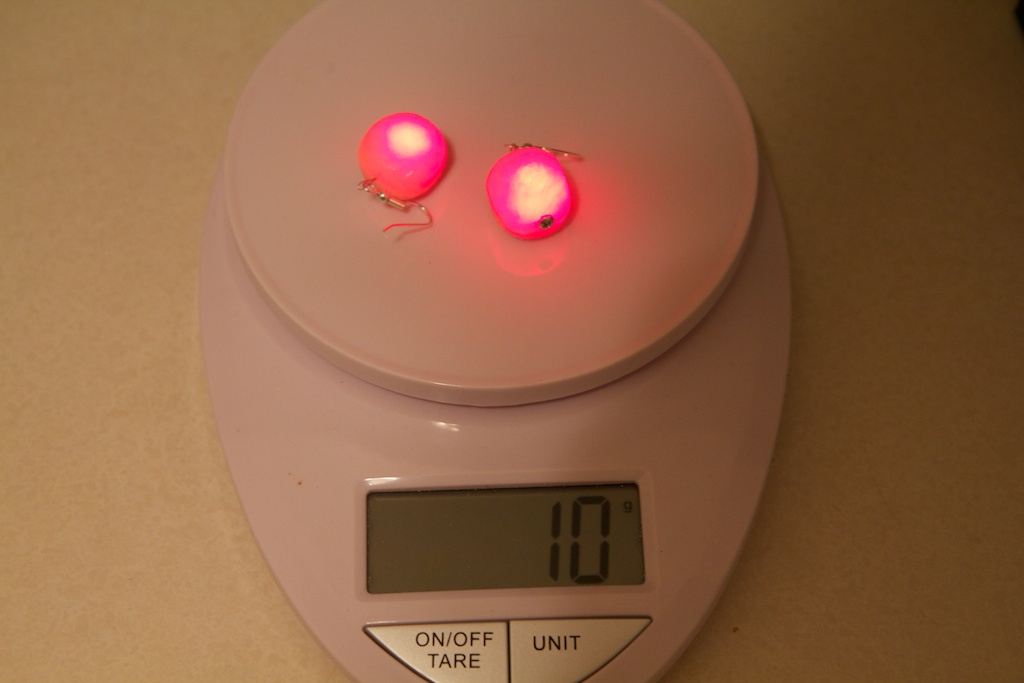 I don't have pierced ears, but a quick Google search indicated that 5 grams isn't unbearably heavy for a pair of fancy earrings.