I was about to write "Please refill me when I'm empty" on the clear plastic tupperware container of pretzels at work when I started wondering if it would be possible to write something on one side of a transparent material that is invisible from the other side.

Thinking back to what I learned about polarizers and birefringent materials, I came up with what you see above.  I think it's a neat "magic" trick that demonstrates some of the weird properties of light, so I thought it'd be fun to write about it.

Light is caused by a disturbance in an electromagnetic field that causes it to propagate through space.  When considered in classical mechanics, it's a phenomena that falls out of Maxwell's equations.  When you move current through a wire, you generate a magnetic field (electromagnet), and when you pass a loop of wire through a magnetic field, you create a current (electric generator).  It just so happens that if you do this fast enough, you don't even need the wire or the current; the electric and magnetic fields involved will continue to oscillate and propagate outwards at the speed of light.  This is a really poor description of what's happening, but all you really need to take away from it for now is that light is a propagating sinusoidal electric and magnetic field.

If you were to draw a doodle representing the E and M fields contributing to light, it might look something like this:

This looks kind of complicated, so let me break it down:

Now you might be asking questions like "where's the photon?".  This discussion will be focusing on classical physics which is fine because this phenomenon can be explained without going into the particle nature of light.

Imagine taking a cross section at a fixed location of the wave pictured above as it moves towards you and it should make sense. 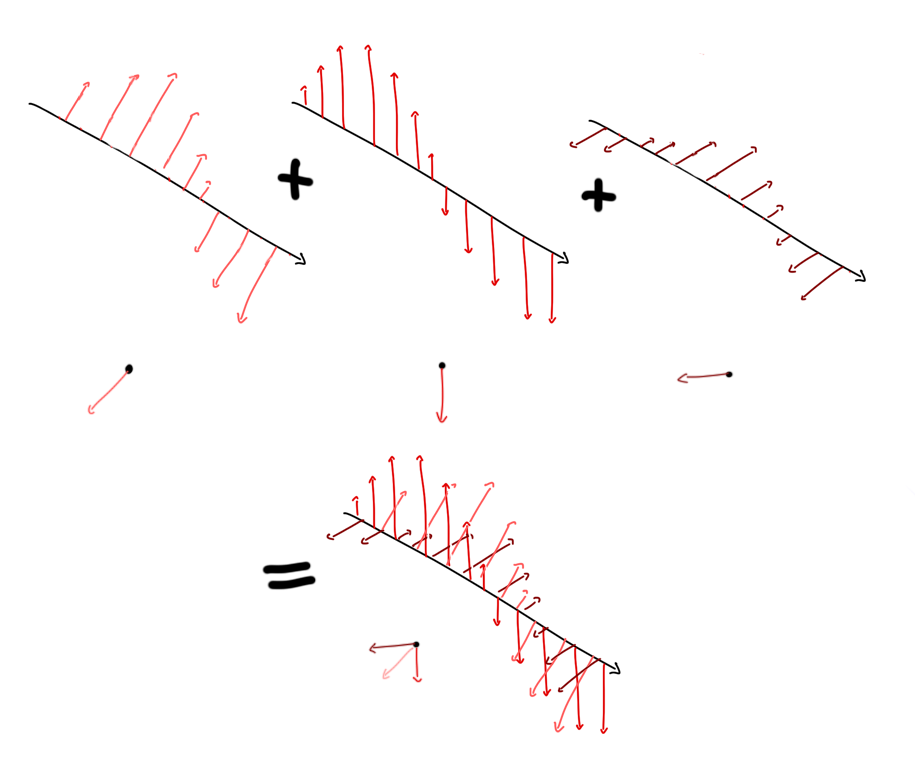 Try not to mistake the similar shape of this diagram with the diagram above.  There is no physical connection between these three light beams besides the fact that they are traveling through the same space at the same time.  Most of the light you interact with every day is comprised of light of all different polarizations added together. 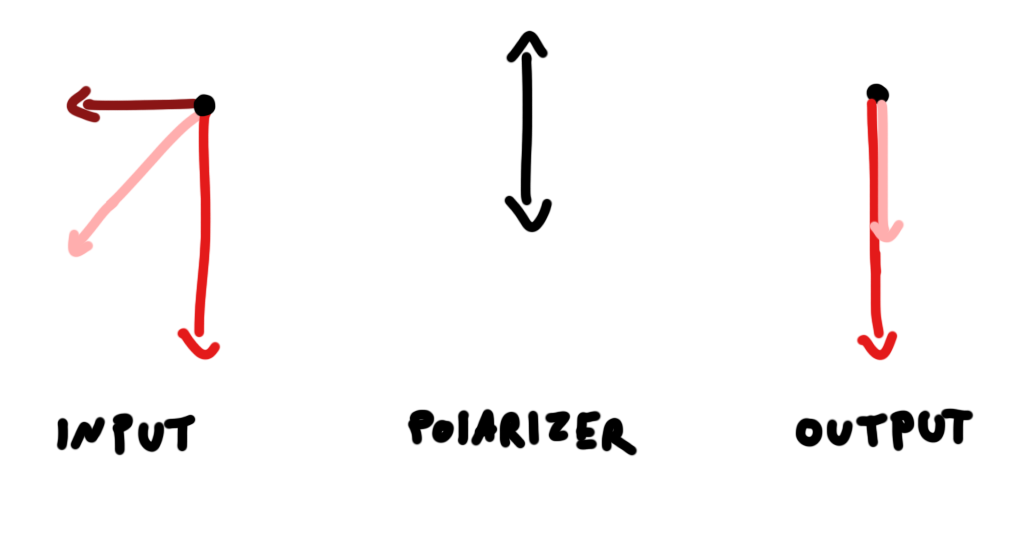 With the diagonal beam however, things get a little more complicated.  The polarizer passes all light that matches its polarization and blocks all light that is polarized at 90

The horizontal component is blocked and only the vertical component is passed through.  This little trick will be especially useful in the next section.

These polarizing filters are fairly cheap and have tons of practical applications.  One famous example is IMAX 3D glasses.  The goal of 3D media is to present a different 2D image to each eye so that your brain can piece together a 3D image. IMAX 3D movie theaters project two different images on the screen using two perpendicular orientations of light.  The lenses on the 3D glasses match these perpendicular polarizations and only allow one version of the scene to pass through to each eye.

Of course, if the viewer tilts his head, a portion of each image will pass through both eyes and the image will become confusing.

Some very unique materials will cause different polarizations of light to travel at slightly different speeds.  These are called "birefringent" materials.

As soon as they leave the birefringent material, all polarizations travel at the same speed, but depending on how thick the material is, they will leave at different phases.  Consider this example where light is passed through a birefringent material (don't worry about the geometry, I flattened everything to make it easier to see/draw): 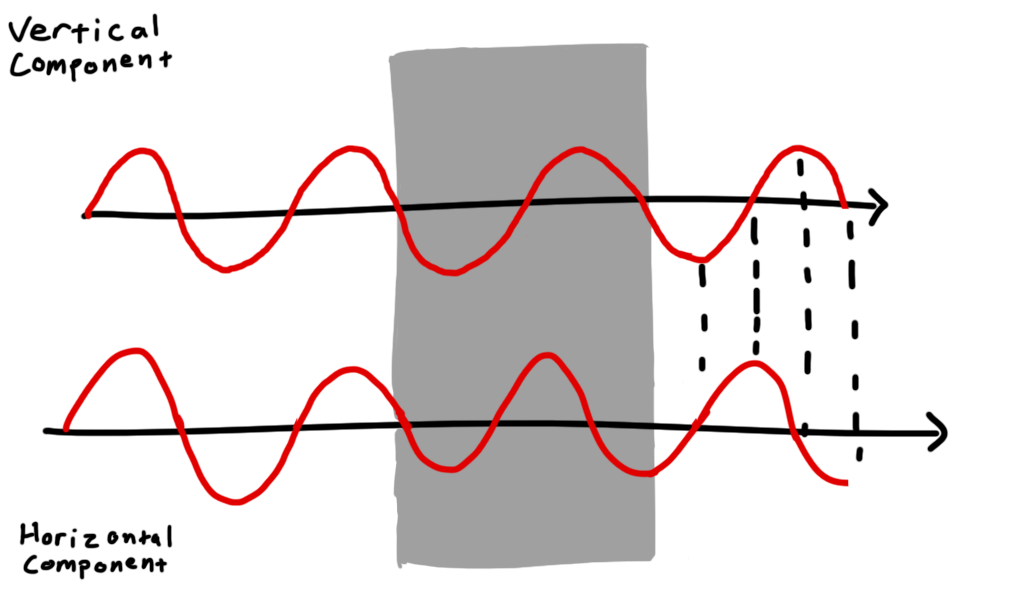 The result is that the two polarizations of light are 90 degrees out of phase (note the black dotted lines).  The resulting light might look something like this: 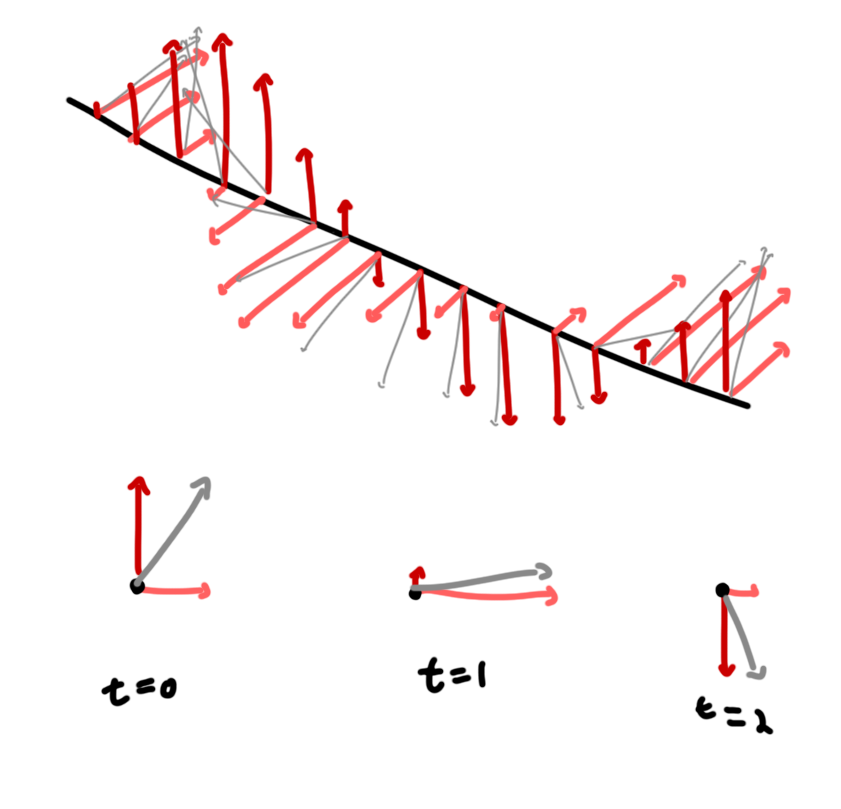 To recap, we're taking a single polarization of light, decomposing it into two different polarizations, slowing one down by 1/4 phase, and adding them back together.  The result of this sum is represented by the gray line above.

Looking at this line, you'll notice that its length never changes, but it seems to rotate clockwise as time progresses.  This is "circularly polarized light".  The resulting wave looks something like a corkscrew.

The advantage of RealD over IMAX 3D is that the filters in the glasses that pass or block circularly polarized light don't need to be in any particular orientation.  If you rotate the filter by 90 degrees, the incoming clockwise light is still clockwise.

In other words, if you tilt your head while wearing circular polarizer 3D glasses, each eye will continue to see the correct image.

There was promise of a magic trick?

The important thing to remember in the above 3D example is the significance of the ordering: Linear -> 1/4 wave -> 1/4 wave -> linear.  Mixing up the order dramatically changes the results.

So let's consider an example with two linear polarizers: 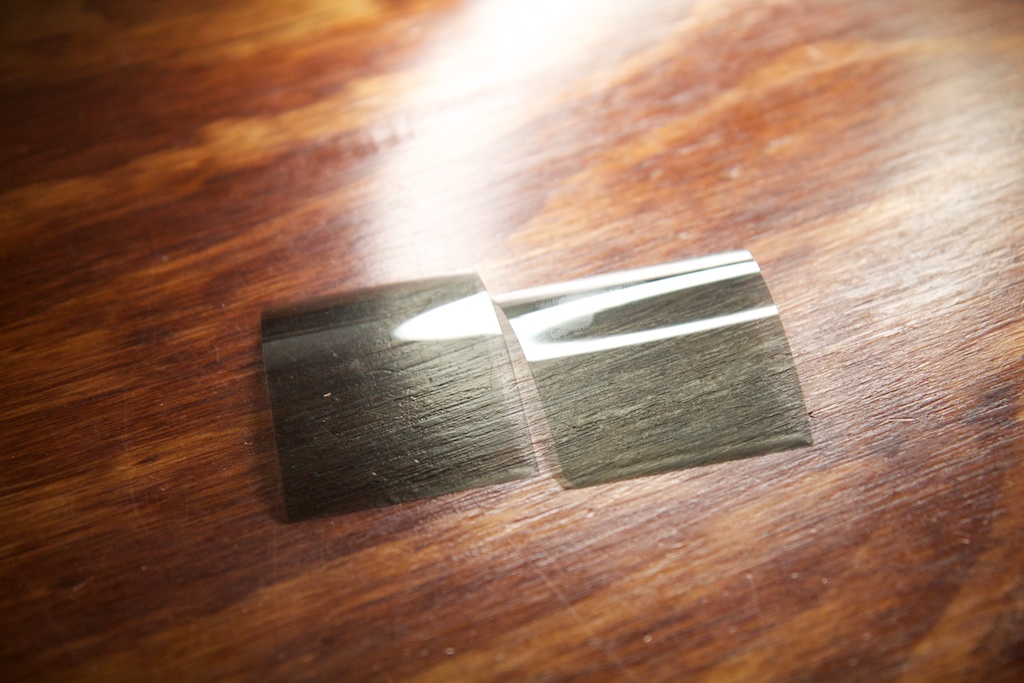 These two polarizers came off the same roll and are currently oriented so that they will only pass horizontally oriented light.  Now I'm going to rotate one by 90 degrees: 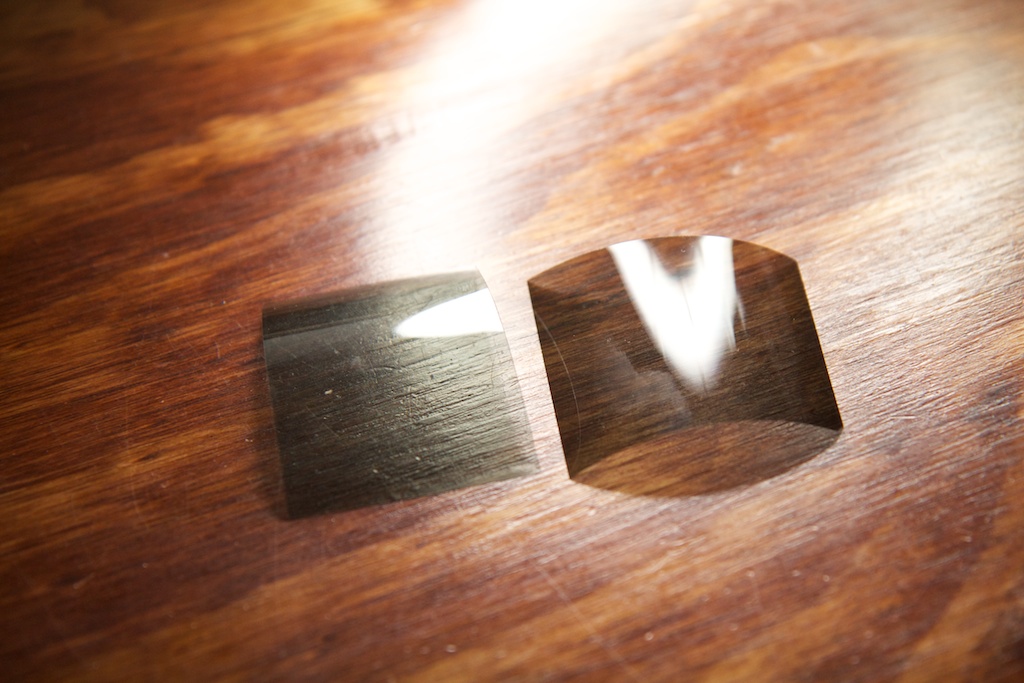 You'll note that it got a little darker.  This is a result of the polarizing effect of the table's surface.  When light bounces up off of reflective surfaces, it tends to have a horizontal polarization.  This is why polarized sunglasses have vertical polarizers; they are trying to block light reflecting off the surface of water/slick pavement/etc.

So let's overlap these a bit:

As you can see, the light that passes through the bottom horizontal polarizer does not make it through the top vertical polarizer.  Since no light is passing through, you see a black rectangle. 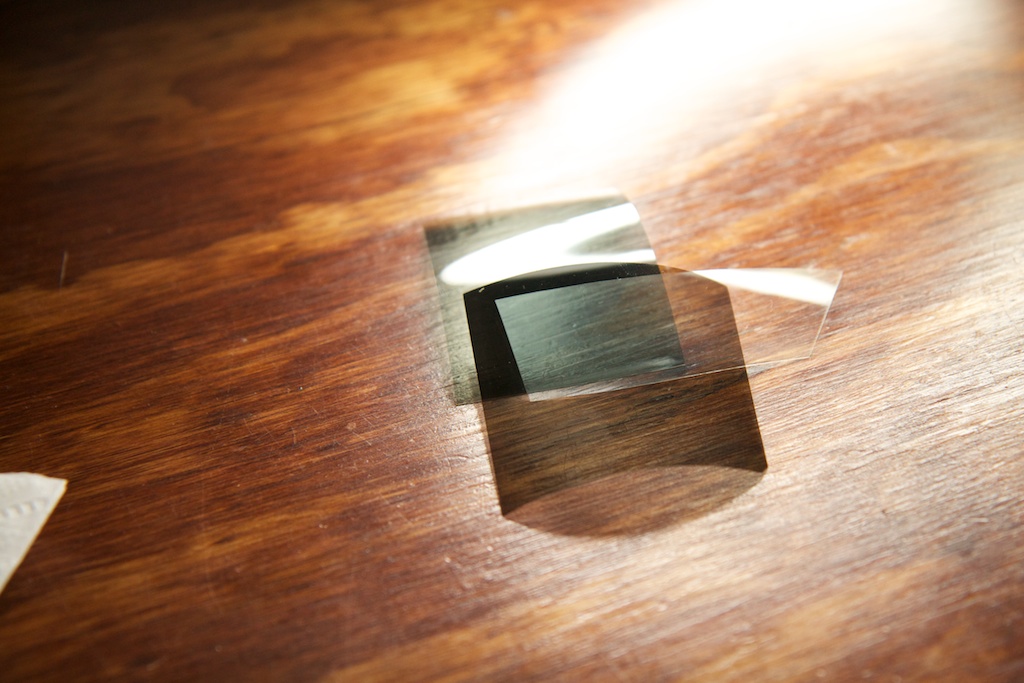 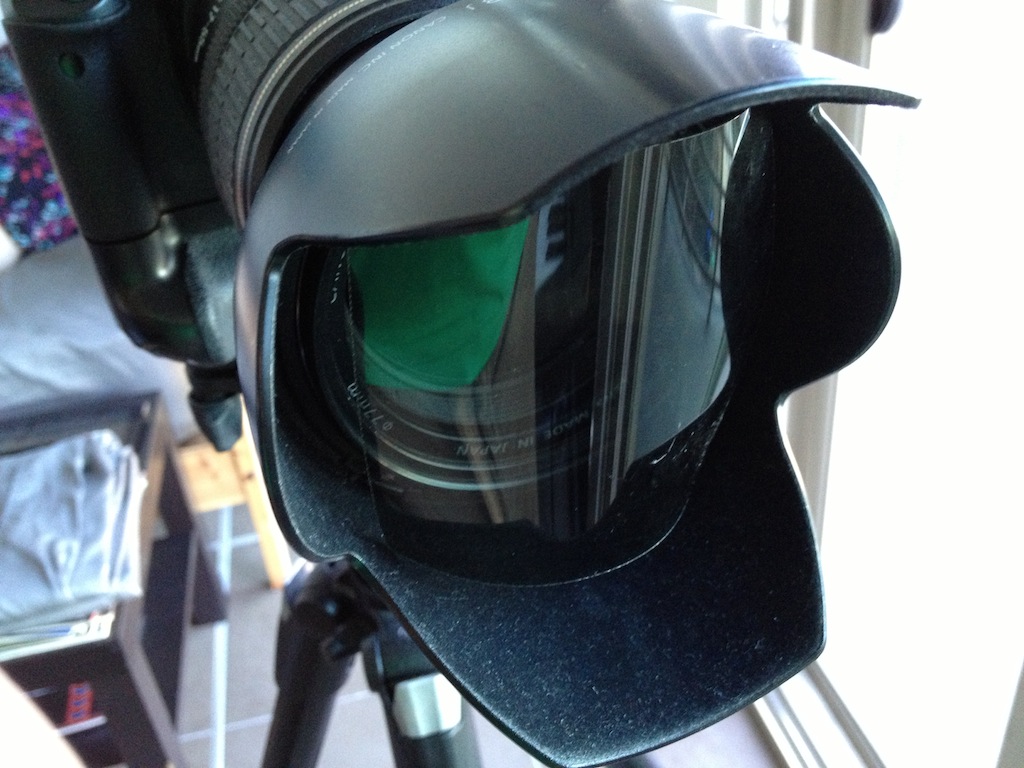 What I didn't reveal in the above video is that I had a linear polarizer over the lens of my camera.  This is impossible to detect looking at just the footage alone.  A portion of the light passing through the linear filter is blocked making the image look a little dimmer, but adjusting the camera settings easily compensated for that.

So what about the magical cards? 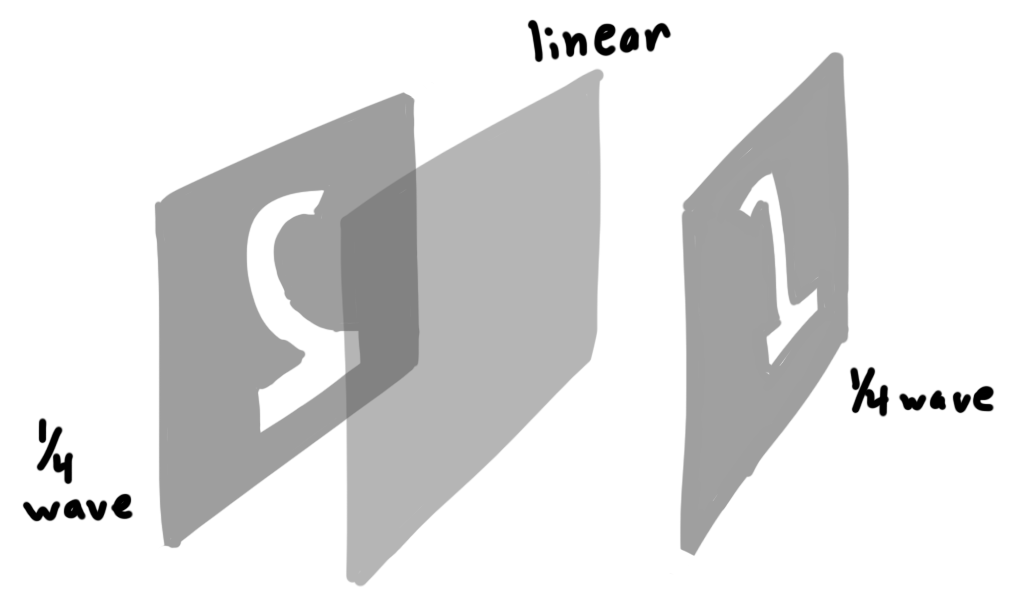 The cards are all made with three layers: two 1/4 wave plates and a horizontal linear polarizer.  The desired designs are made from the negative space cut out of the quarter wave plates.  The whole thing is sandwiched inside a no-heat adhesive business card lamination pouch.  With this configuration, there are only three possible outcomes for the light: 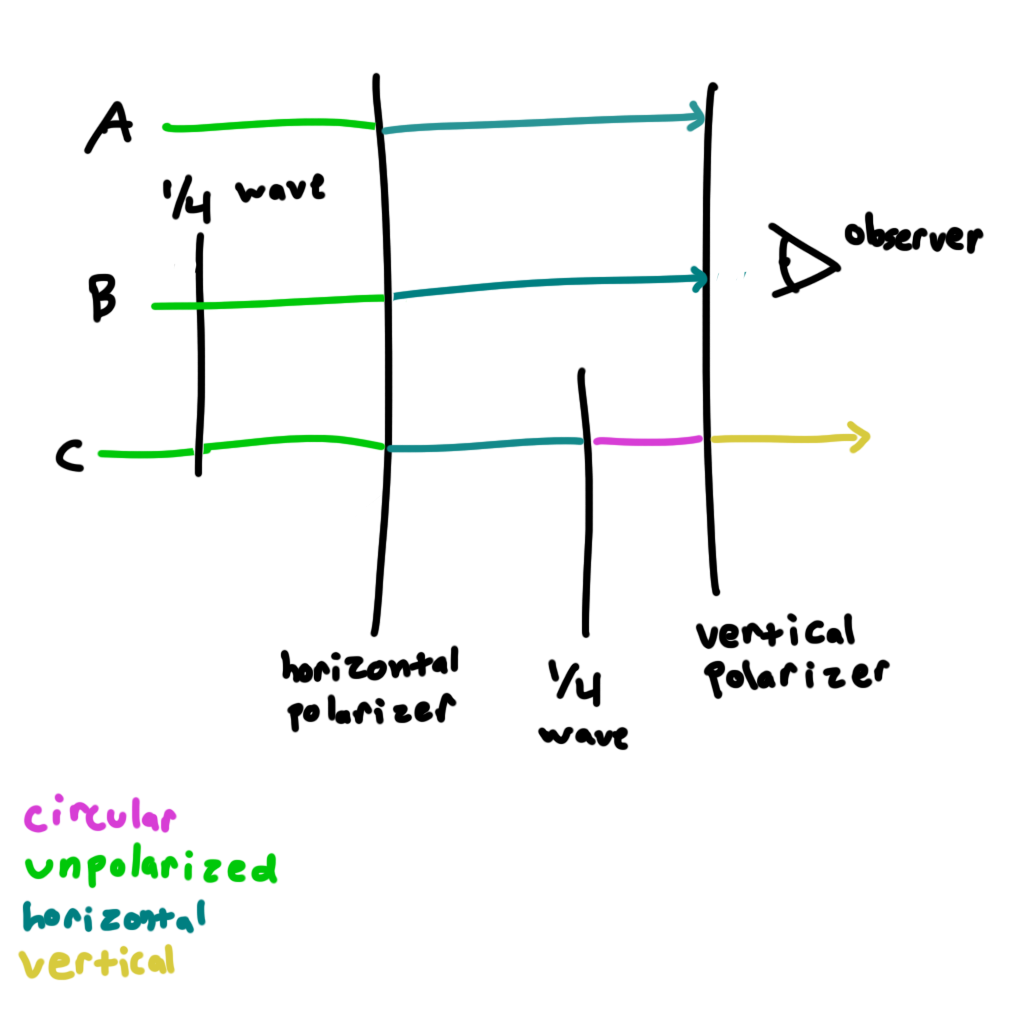 B: Unpolarized light is passed through a 1/4 wave plate which does nothing and then through a horizontal polarizer.  It is then entirely blocked by the vertical polarizer just like A.  The observer cannot see this light.

Put simply, all that matters here is whether or not a quarter wave plate is between the vertical and horizontal filter.  If you attach the vertical filter to the observer, they will see different designs on either side of the card.  The quarter wave plate portion will be transparent and the rest will be black.  Everything on the back side of the card will be similarly transparent.

You need to be careful though.  If the card is rotated by 90 degrees, the linear polarizers will be oriented the same way and the entire card will be transparent.

So what's the application?

I really thought long and hard about this one.  I guess maybe if you were a guy who sold polarized sunglasses, you might be able to make some neat business cards?  Kind of a stretch.

Besides that, it's a pretty cool science demo that will certainly gee-whiz anyone who is unfamiliar with polarized light.  If you'd like to make your own, you can order materials from a number of places online.  Be careful though, quarter wave plates are very easy to tear, so make sure you cut them with extremely sharp tools or your design might get ruined.

Outside of the world of neat cards, there are tons of applications for polarized light.  Anything from the linear polarizers in the LCD of the display you're looking at right now to the circular polarized light used in RADAR.

11 thoughts on “A Magic Trick”