Yesterday, I hopped into my car to take a drive to Goodwill for some Halloween costume parts when I noticed that my car's battery was dead.  Very, very dead.

I really don't drive that often.  In fact, I didn't really realize how little I drive my car until I tried to start it yesterday.  Turns out, I haven't sat in the driver seat since before I left for China.  A week before in fact.  I'm coming up on two months now of non-driving.  On top of that, I had apparently left the cabin light on the entire time, so it's not much of a surprise that the battery didn't make it.

The smart thing to do in this kind of situation is to get someone to help you jump-start your car, but there are rarely other people in my parking garage, and that's too boring anyway.  I ended up removing the battery from the car and charging it on my own.

Unfortunately, I wasn't really anticipating this project turning into a blog post, so I don't have too many pictures or other documentation.  This is a very text-heavy post.

Car batteries can put out a metric crap load of current.  We're talking like 60-70 Amperes easily.  This amount of energy can be extremely dangerous if not handled correctly.  I hope that you learn a thing or two from this post, but I do not advocate that anyone attempt what I tried in this post.  If it makes you feel any better, following this guide will only fix your battery enough to drive you to Pep Boys so you can recycle your permanently damaged car battery and replace it with a new one.  It's probably not worth your time to follow my steps.

So, right.  When I went out to start my car, it was dead.  I mean DEAD.  I might as well have had the battery disconnected.  Grabbing my voltmeter, I measured 0.16V across the terminals.  This is a pretty bad sign.  Regardless of the chemistry, once most batteries are fully discharged, they are permanently damaged.

I promptly removed the battery and brought it up to my apartment.

WIthout doing too much research before hand, I knew that I would need to dump quite a bit of current into the battery to bring it back to life.  I knew from my work with Li-ion cells (and just about any sort of electric energy storage technology), that this battery was going to suck up a lot of current at the beginning and then take progressively less until it was fully charged.

Ideally, I would have plugged the battery into some sort of constant-current charger that would maintain a 2 or 4 Amp charge, but I wasn't about to spend $40 on a tool that I was only going to use one especially considering that I'm an electrical engineer.

Instead, I reached for the next best thing: 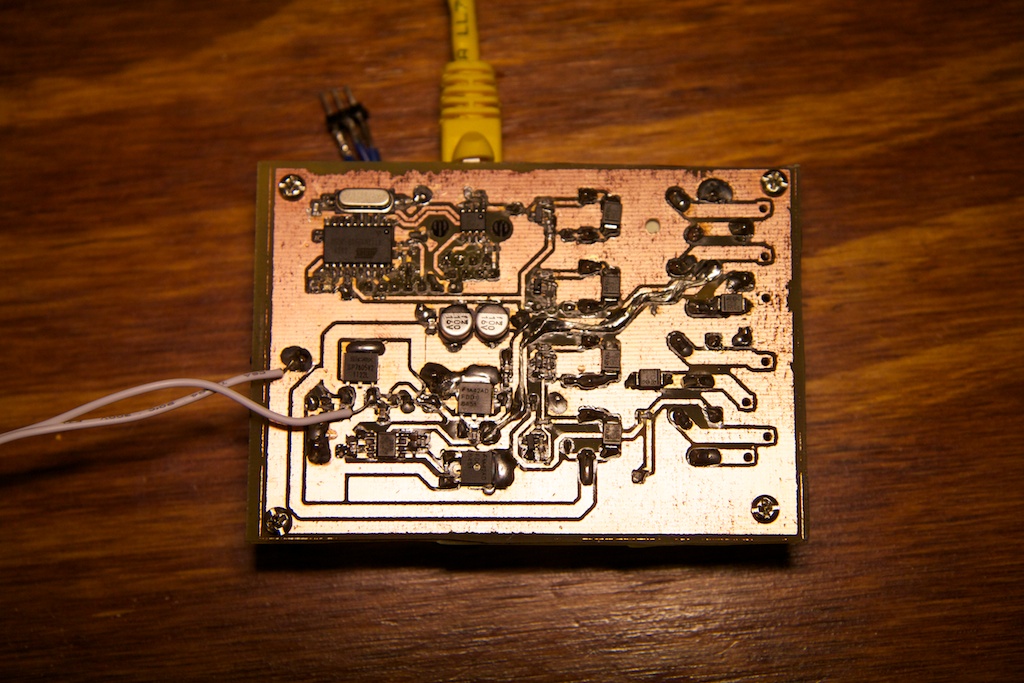 This is the circuit I used to control my windshield wipers for my beat-tracking windshield wiper project.  Although I don't know exactly how many Amps of current it can deliver, I clocked it at 11.2, and it seemed to do just fine:

Where I lit my desk on fire using the lead out of a #2 pencil.

This power supply is a simple push-pull driver that can be used to drive a buck converter or electric motor.

I'm just realizing as I write this that a push-pull driver is a supremely bad thing to use on a car battery because when the driver goes into "pull" mode, it's shorting the battery to ground.  That might explain why my circuit board got pretty warm in the process.  It's possible that the parasitic capacitance of the battery helped to iron out the voltage ripple and provide me with decent DC.  I didn't take any measurements of the ripple current, so I won't know for sure.

By the way, did you read my disclaimer above?

I used the 12V rail of a 200W ATX power supply to power the wiper driver.  Its 12V rail is rated for 17A DC current, so it's more than enough to charge a battery under controlled conditions. 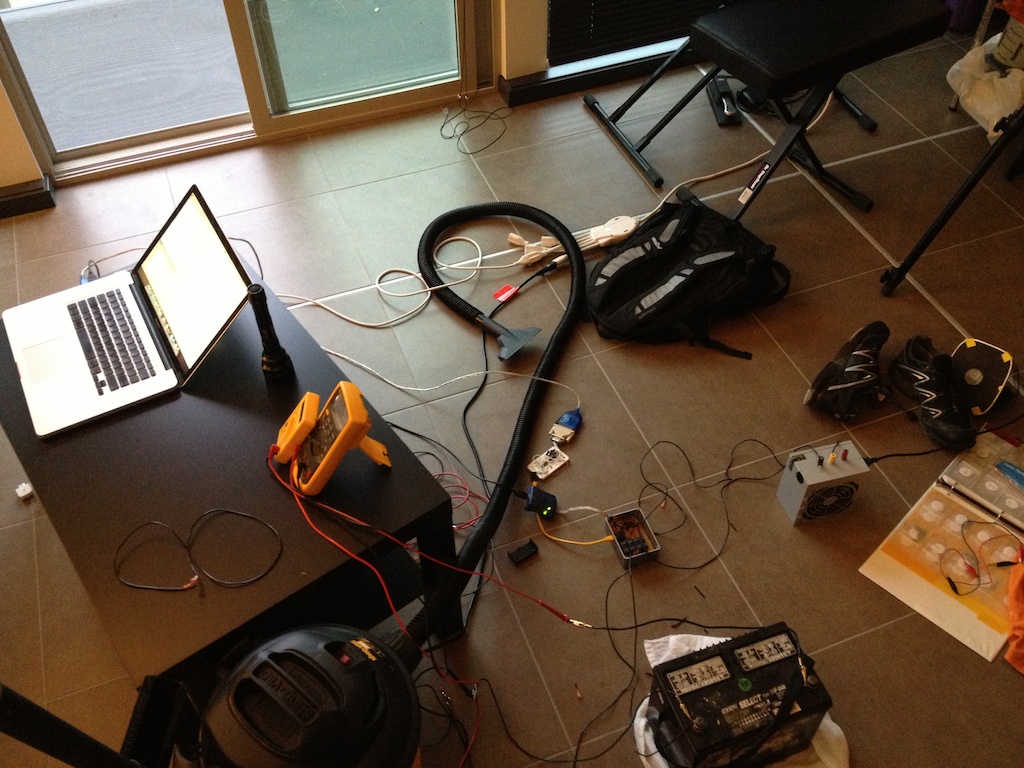 My apartment gets kind of messy on the weekends...

With the wiper driver connected, I began to slowly ramp up the voltage: 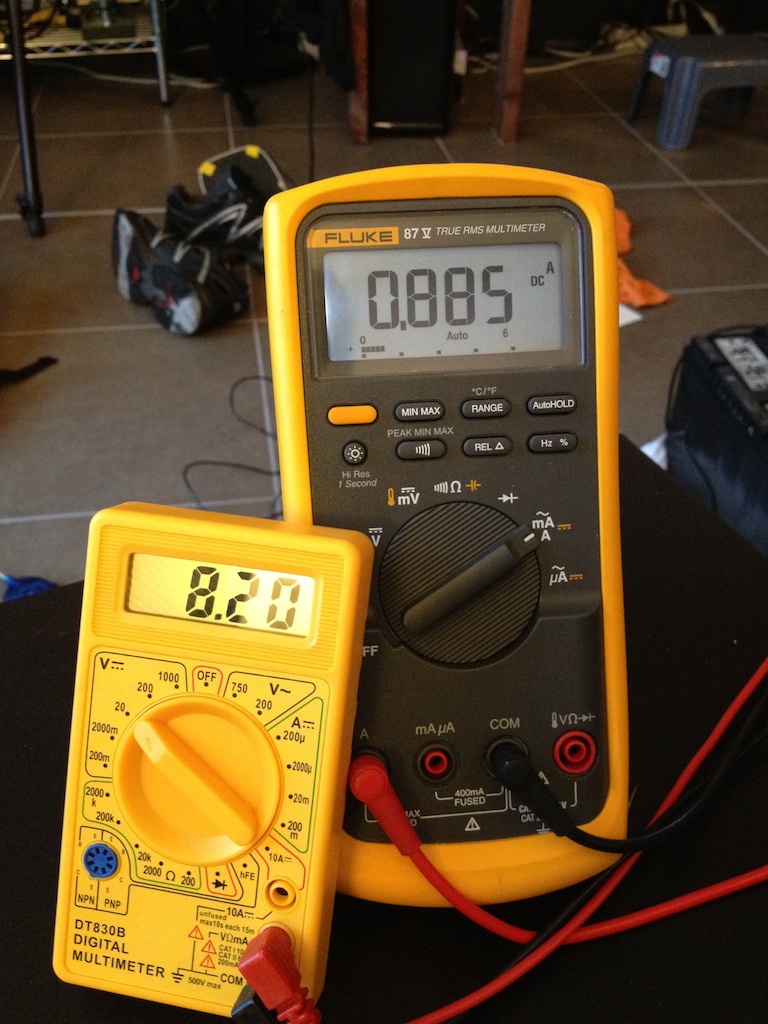 I wasn't so much concerned about the voltage as I was the current.  My goal here was to keep the current going into the battery under a safe threshold.  I arbitrarily chose 4A and started to turn the wiper driver up higher. 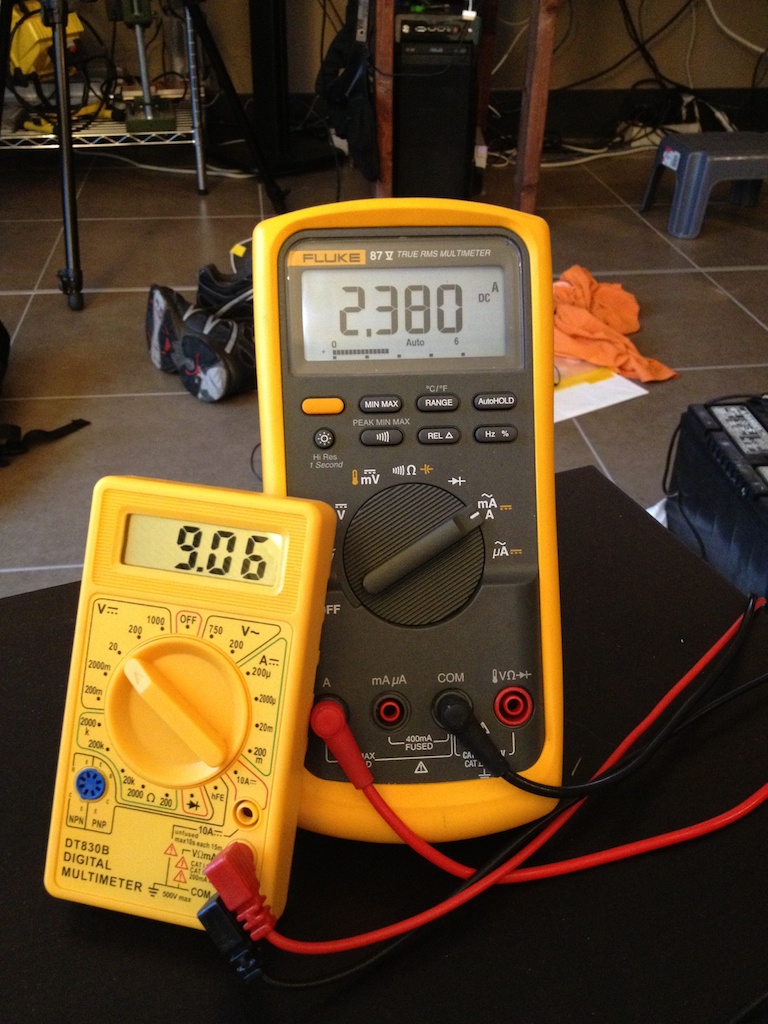 Leaving this setup alone for a while, I noticed that (as expected) the voltage across the terminals rose as the current through the battery sank.  Eventually, I was at the maximum duty cycle of the wiper motor, so I left it for a few hours.

My reasoning at this time was that I knew car batteries have a nominal voltage somewhere around 12V, so at 10.52V, I was getting close: 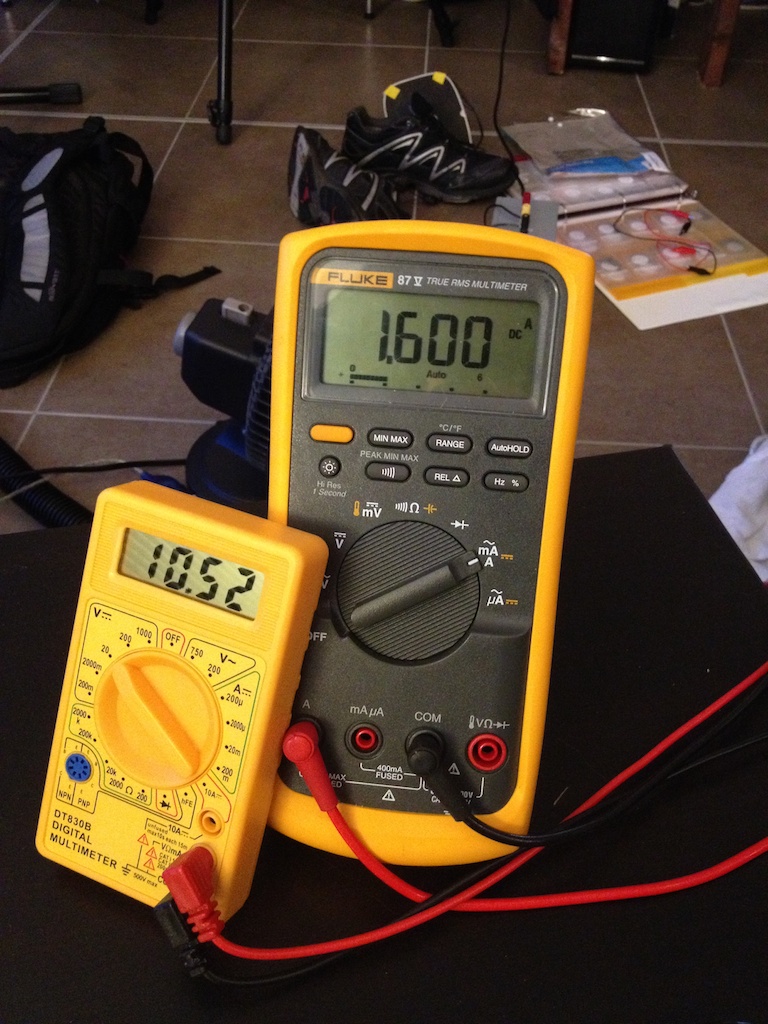 Growing impatient, I decided to try to start the car.

I dragged the car battery back out to the parking garage and installed it in my car.  I was underwhelmed with the results.  In addition to the car not starting, the battery voltage plummeted down to about 1.5V as soon as I connected it.  It seemed as though the battery couldn't even power the on board electronics.

Disappointed, I brought the battery upstairs and took some measurements.  I noticed that while I was nearing 11V with the charger connected, the actual open-circuit voltage of the battery was something around 9V.  It dropped even lower of course with a load.

As the current dropped to around 900mA, I posted this on reddit and got some helpful replies.  One user linked me to a helpful PDF which contained the following graph: 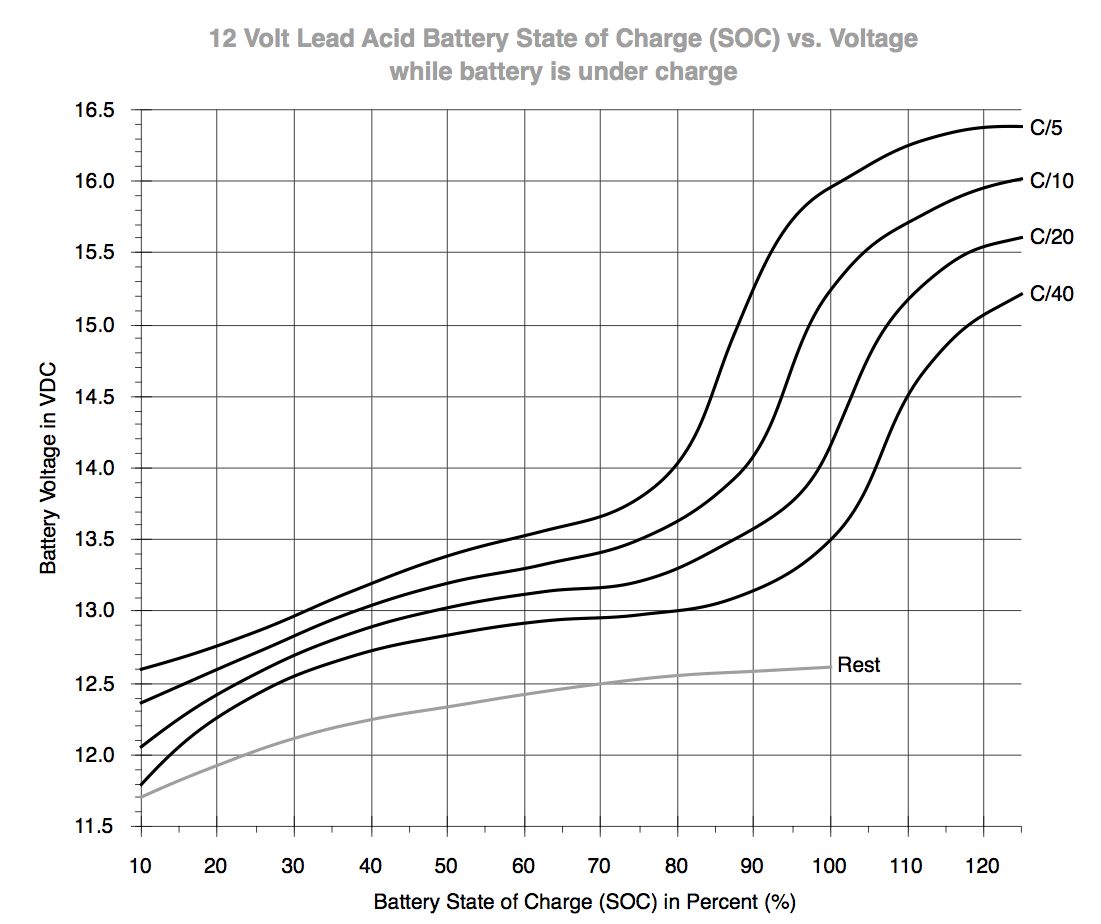 This seemed to confirm everything I had seen up to this point.  The higher the charging rate, the higher the battery voltage, and the "rest" or open circuit voltage of the battery was much lower than the charge level.  It seemed that as the charging rate dropped, the voltage approached the rest level.  This fell in line with my theory that the current would reach zero and the voltage would reach 12V after enough time had elapsed.

Also, at around 9V of rest voltage, my battery was well under 10% of capacity.  This explains why it didn't do much of anything when I tried to use it before.

The reddit thread also pointed out that the battery was pretty much hosed at this point.  There are a number of lead-acid batteries that can handle a deep discharge such as those used in electric golf carts or fishing trawlers.  These are called "deep-cycle" batteries.  Car batteries are not deep-cycle batteries, and a lot of chemical reactions take place when they enter deep discharge which will permanently damage them.

I got the impression from the thread that I might be able to bring the battery back long enough to drive to the store to buy a new one, but there would be no saving this battery.  So we're talking less Beetlejuice resurrection and more A.I.

As time wore on, I noticed that my current had fallen to 600mA, but the rest voltage was still under 11V.  If I was going to charge this battery up in any reasonable amount of time, I was going to need a higher voltage rail.  Most battery chargers (such as an alternator) use a 14-15V rail.  Where was I going to get one of those?

I scoured my apartment for a 15V DC power supply, but came up short.  Then I started to look for lower-voltage isolated DC power supplies that I could potentially run in series with my 12V ATX rail.

I came up with a 9V transformer that I had ripped out of a DC wall wart.  I had previously tried to turn this transformer into an EL wire transformer by removing turns from its secondary winding and using the secondary as the primary.  It...didn't work.  You might also recognize it from its use in my 60 Hz post.

Having removed some of the windings, I ended up with a 3V AC transformer.  I used that along with a few diodes arranged as a full-bridge rectifier to create this: 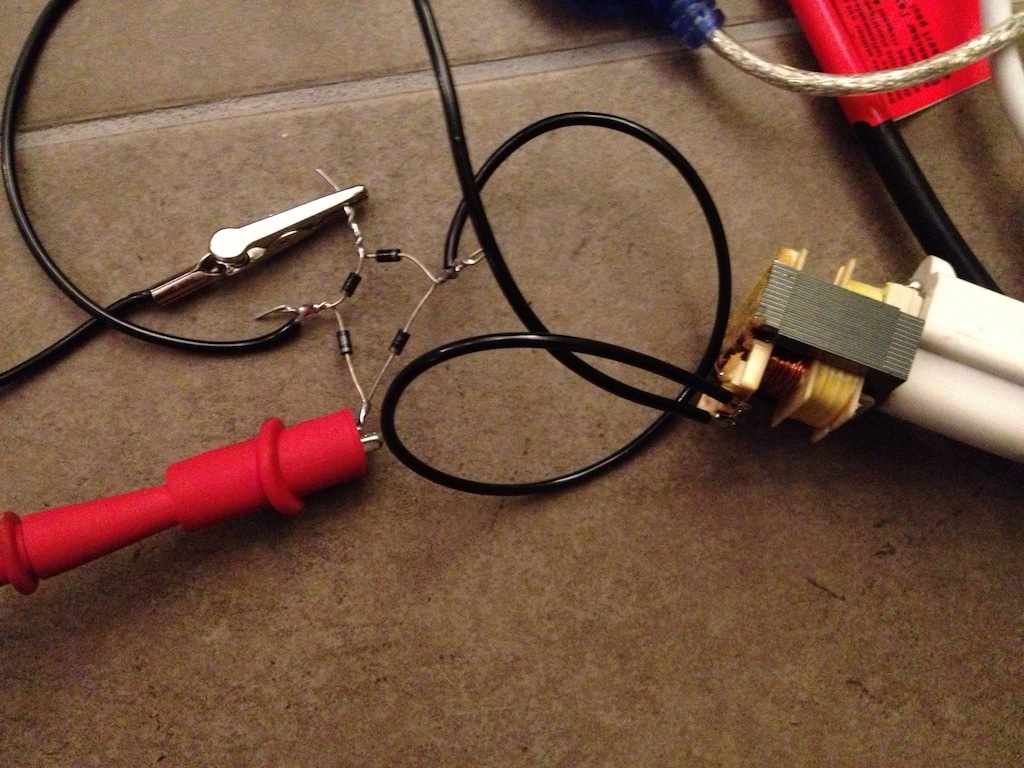 Allow me to remind you of that disclaimer...

I also added a big capacitor in parallel with the output to help iron it out a bit.  What's funny is that this was actually the capacitor that I had ripped out of the wall-wart to begin with.

Because the secondary winding of this transformer was in no way tied to ground, it could act as a floating voltage source and be added in series to my 12V rail.  This quickly made the current into the battery sky rocket up to 1.6A from 600mA.

My little 3V transformer was never meant for this kind of load, so its magnetic core quickly saturated, and its output sagged down to .5V or so.  The core's saturation along with what I can assume was a lot of current on both turns of the transformer caused it to heat up quite a bit.  It never got hot enough to be dangerous, but just to be safe, I added some active cooling: 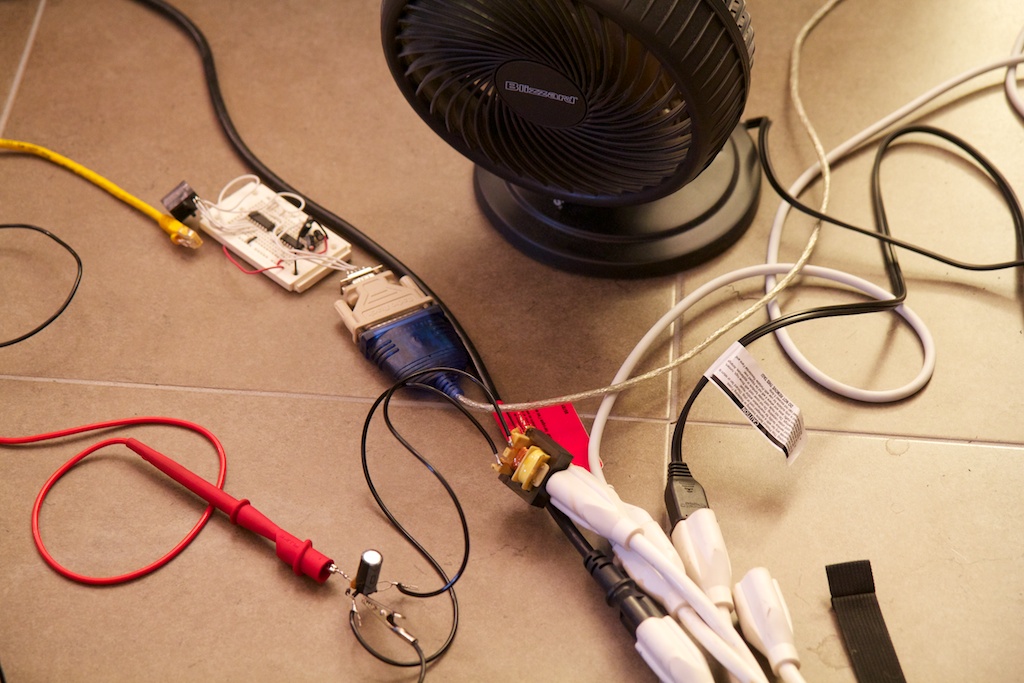 Regardless, this meant that my battery was charging at a speedy 1.5A or so.  I let it charge into the night and slept next to it so I could be there to wake up screaming when it set fire to my apartment (also, having only one room, I sleep next to basically everything in my apartment).

When I awoke, I took a measurement:

And when the power source was removed: 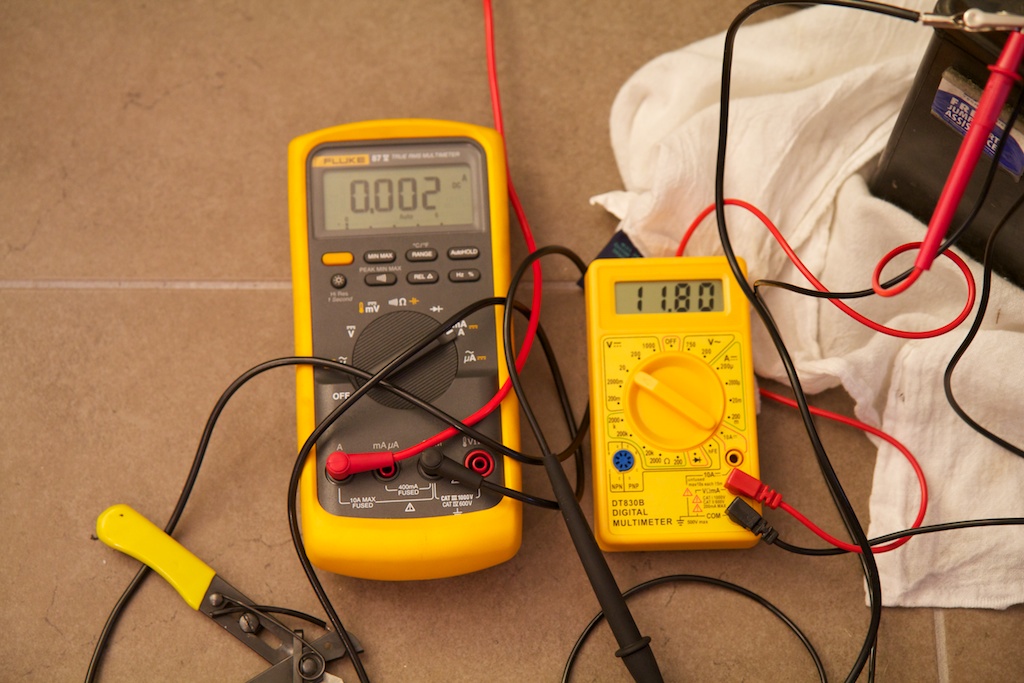 So with a rest voltage of 11.8, I was registering around 20% on the battery capacity chart.  I figured this was good enough and stopped charging.  Regardless, I wasn't about to leave this thing plugged in while I was at work.

A Short Lease on Life

I connected the battery to the car and watched the cabin light come on immediately (this is when I found out how the battery died).  Measuring the voltage on the terminals, I got 11.6V.

Perhaps a little anti-clamactically, the battery worked like a charm and started up my car  instantly on the first try: 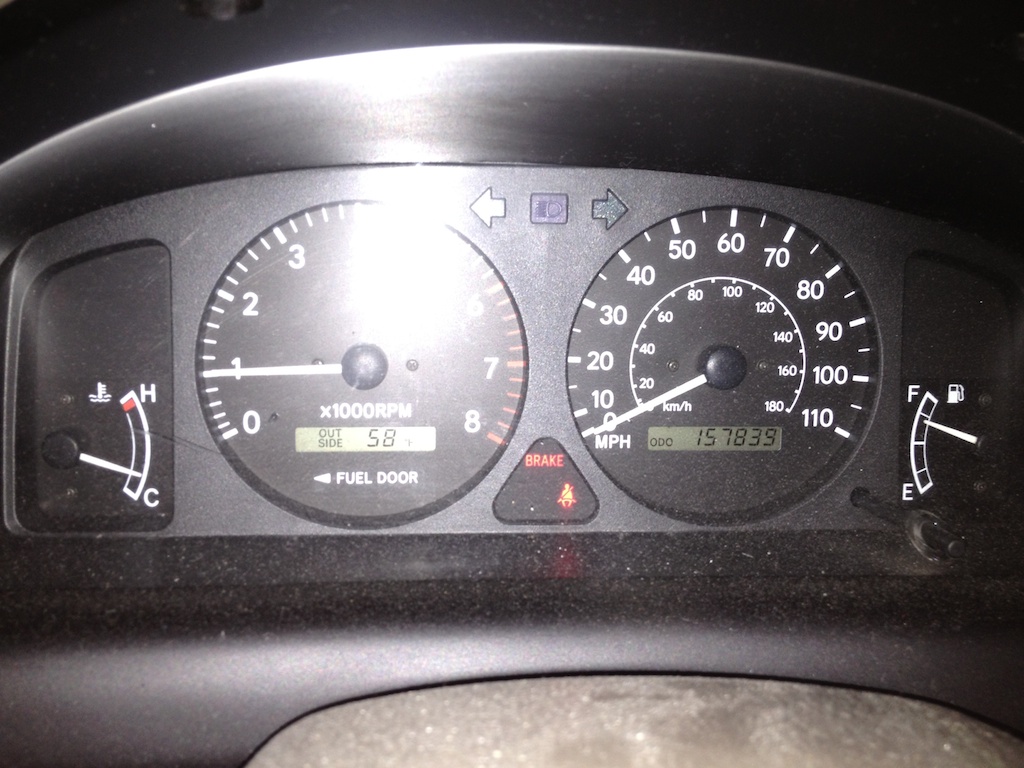 After letting the car idle for 10 minutes or so, I immediately drove it to Pep Boys and got a replacement battery.  It ran me $100.

So yes, that was quite a bit of work to put into a battery that I ended up recycling, but I did save myself the $40 it would have cost for a battery charger that I would have used a single time.

I also learned quite a bit about lead acid battery chemistry and charging profiles, and I hope you did too.

55 thoughts on “Bringing a Car Battery Back from the Dead: A Ch00ftech Halloween Tale”