When you feel like doing some really rapid prototyping and don't want to wait around for a board to come in the mail, you usually have to print a board of your own.  I've done this a number of times (the original bullet counter was a home-printed board).

The whole process has a number of steps (which I will be going into in another post), but one of them involves printing an acid-resistant substance on a copper sheet and dissolving the un-coated copper in an acid.  As I have mentioned earlier, I had some really crummy ferric chloride acid that didn't do a very good job of etching my boards.  I would usually end up sitting around for an hour or so waiting for it to etch only to have the etchant start to eat under my etch-resist while other free portions were still un-dissolved.

Ferric chloride is also kind of pricey, so I decided to try my hand at some home-brew etchant.  I found a recipe online that calls for just two ingredients: 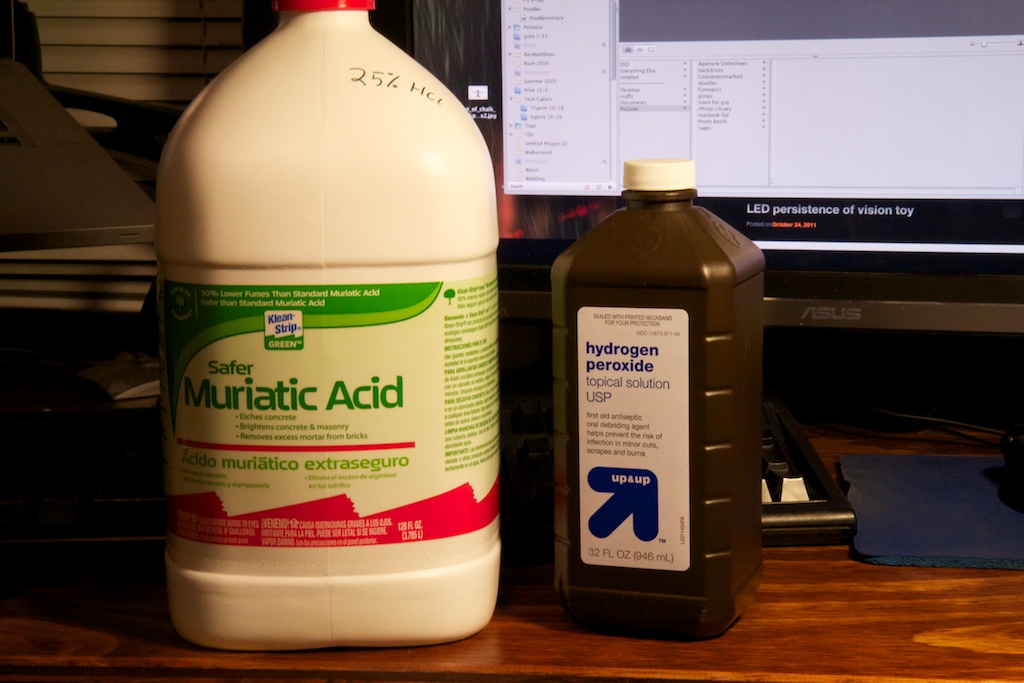 The goal is to have about 10% HCL and 2% H2O2.  The H2O2 claimed to be 3%, but there were no details on the HCL bottle (save for what I added in sharpie later).  A quick google search turned up some documents on the Klean-Strip brand HCL:

Next, I took a small piece of copper-clad circuit board and drew on it with a special etch-resist marker: 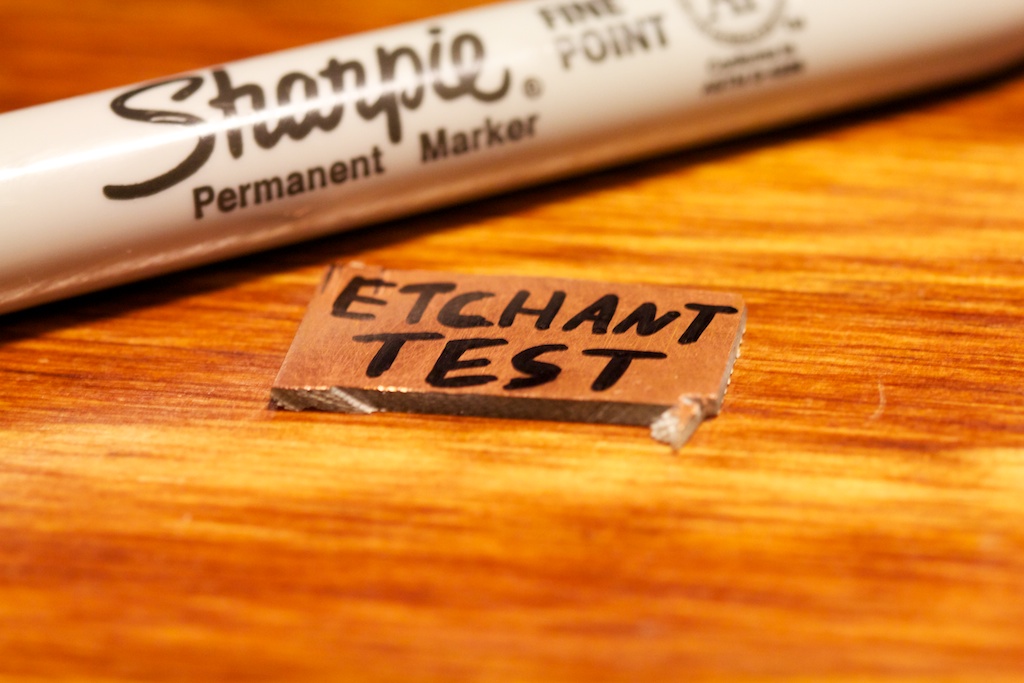 By which I mean a sharpie.

I cracked a window and then dropped the test piece into my solution: 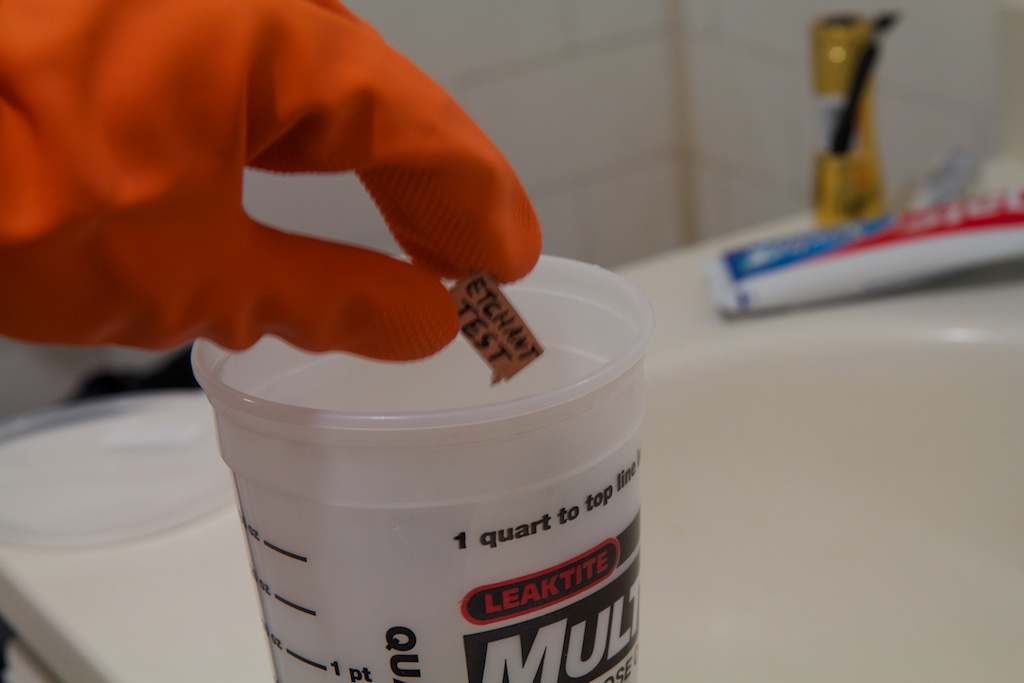 I immediately noticed a fair amount of bubbling.  I originally paid no attention to these bubbles, but as time wore on decided that it was a pretty good idea to agitate the solution to keep them from building up.  I used the wooden handle of a thin paint brush to move the little board around. 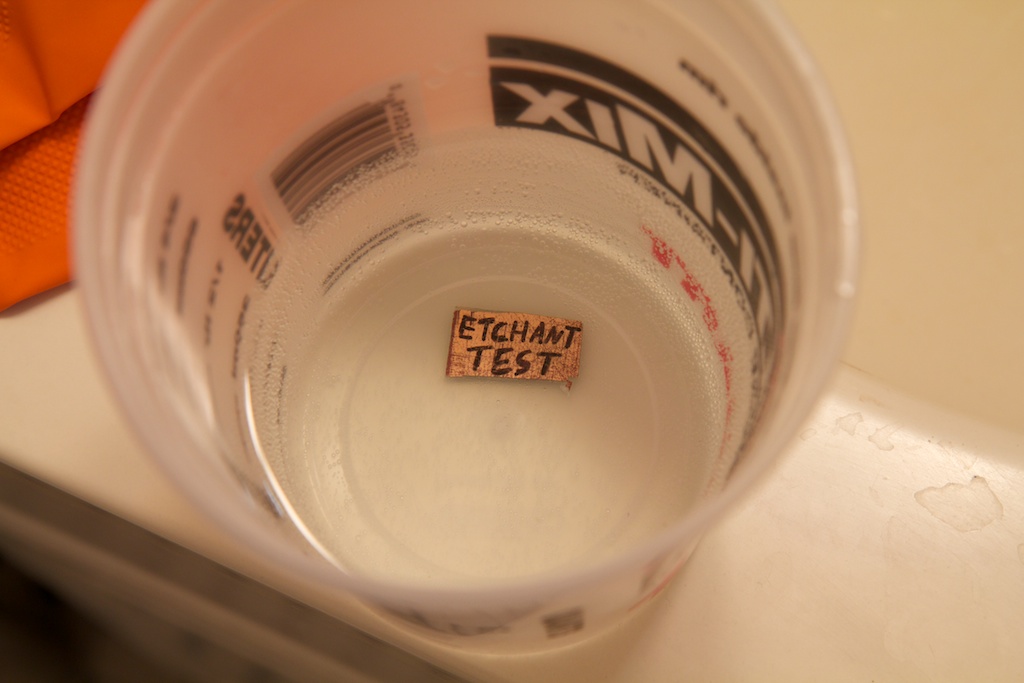 I also decided that it would be a good idea to heat the solution a bit to speed the reaction along.  I filled the sink with hot water and placed container in the hot bath being careful not let any water into or acid out of the container.

You can already see that some of the copper has been eaten away by the acid.

After a while, the solution started to turn a little blue-ish as the copper was dissolved: 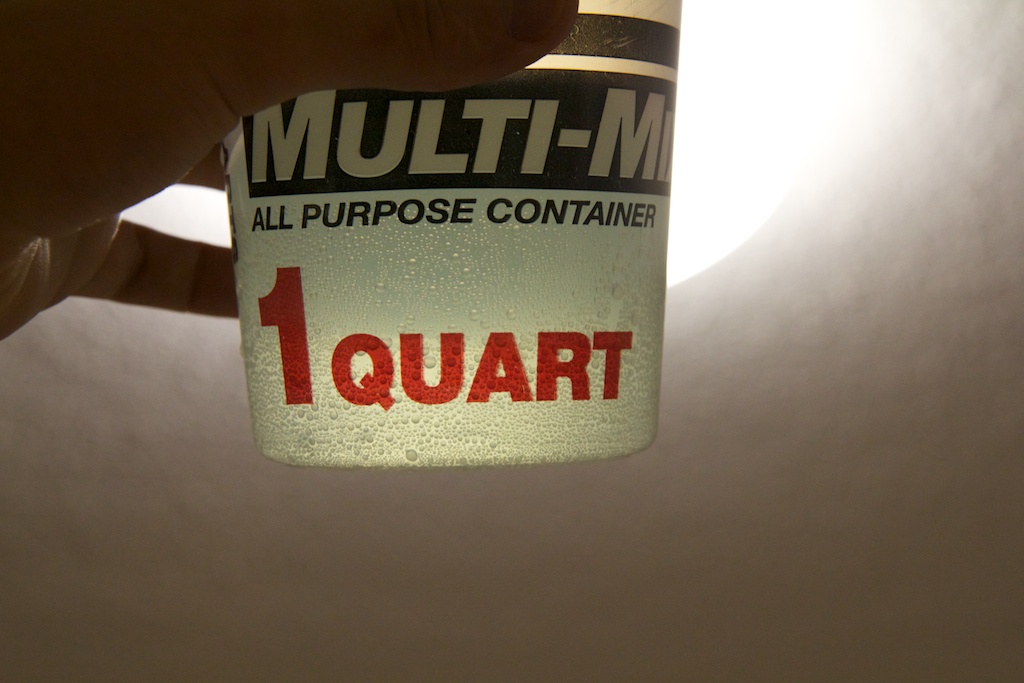 After an hour of stirring and mixing, I removed the board, washed it off, removed the sharpie with some acetone and PRESTO CHANG- 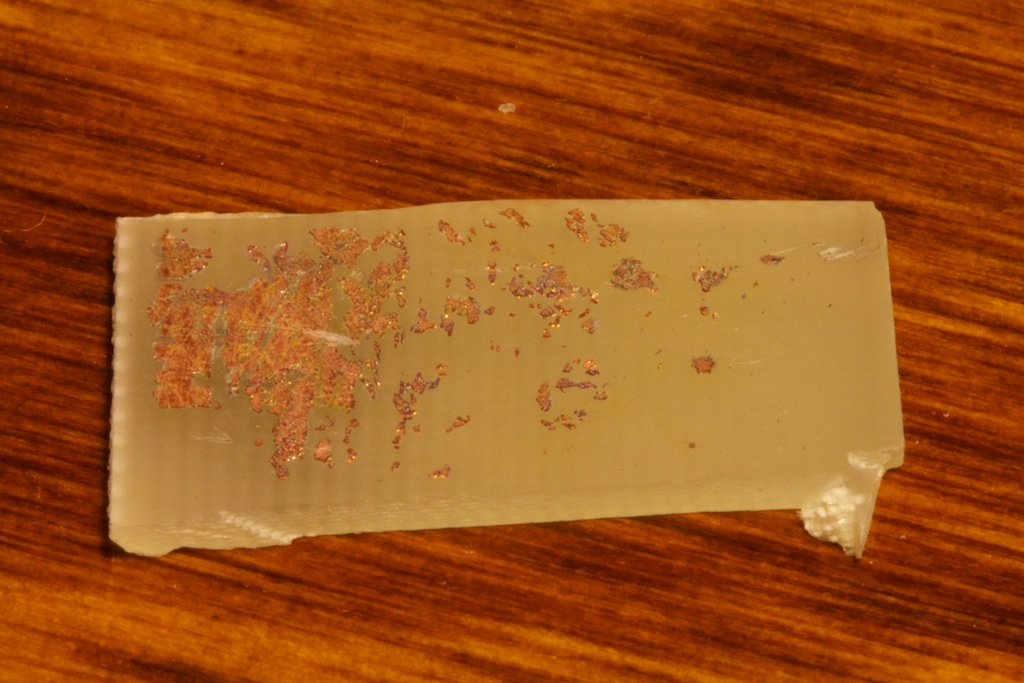 Well, I did a number of things wrong.  Firstly, Sharpie isn't the greatest etch-resist marker, and my copper clad was pretty beat up (scratches in the copper can lead to under-cutting of the etch-resist.

Barring that though, there was something seriously wrong with my solution.  Most of the guides online talk about the etching process taking less than five minutes.  Mine was an order of magnitude slower.

My theory is that the muriatic acid that I used wasn't very strong or that it had some kind of buffer solutions mixed in with it.  The stuff was advertised as producing "90% less fumes than standard muriatic acid" and being "safer than standard muriatic acid".  I want the dangerous corrosive stuff dammit!  My guess is that this acid is just super weak.  It says that it's "less than 25%" in the documentation, but I'm willing to bet that it's much much less than that.  Hell, HCL is supposed to corrode your lungs and make it hard to breathe and yet I could barely smell the stuff I was using.

This was the only brand of HCL that Home Depot carries, so I'm going to take a trip to Lowe's tomorrow and pick up some of this stuff.  It claims to be over 31%!