So, earlier, I expressed an interest in changing my analog accelerometer to a digital one. I found an excellent candidate, the LIS33DE by ST devices, but it had this weird footprint.

My analog accelerometer claims to have a 4x4mm body LGA-16 footprint: 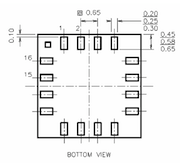 And the digital one has a 3x3mm body LGA-16 footprint: 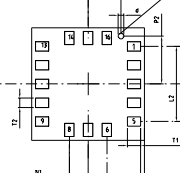 Notice the weird layout? I suppose when you get down to 3x3mm, you can't pack the pins the same way.
For some reason, I thought this layout was extremely uncommon. I suppose I was mixing it up with the elusive PLCC-24 that I spent so long looking for. Turns out to be pretty easy to find. 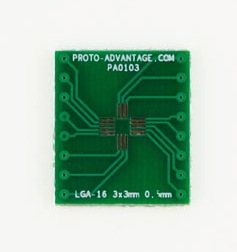 This is great because the digital accelerometer should be much less of a hassle, and it saves me about .000000000007 square kilometers (or about 7 square mm) of space! I ordered my new accelerometer and the stencil kit.
I've also been looking at smaller buzzer options. I found one on digikey that is just 1/4 of my current buzzer's size, but I learned that buzzers can't really generate any arbitrary tone. They're really best when they are driven at their resonant frequency (usually 2kHz or 4kHz); at other frequencies, they're very quiet. Because of this, I don't think my guitar tuner is going to work quite how I want it to (besides, most guitar tuners produce both fundamental tones and overtones. Can't do that with a buzzer).
Instead of making a guitar tone generator, I think I want to actually try and add a microphone so that it can act like a real tuner. I've seen some tutorials online for how to perform a simple fast Fourier transform, and I could use the face of the watch as a tuning indicator.
I've got a few condenser mics floating around, so I'll play around with this at some point, but for the final version, I'll be using something like this as my mic.