Okay, so soon after I last posted, I started toying around with my old AVR mkII ISP programmer to see if I could get it to work again. It worked at some point in the past, but I've reformatted my laptop since then.

I will spare all the details suffice it to say that I spent about 4 hours trying to get the development environment set up, and for like 8 seconds, everything was swell-ish.
I know that the programmer worked at one point, but it didn't like my chip because my chip, the ATmega48A, varies slightly from the ATmega48 that its software is designed to work with. These two chips are identical as far as I care, but they have different signatures and the programmer was complaining about that.
I tried to write my own "driver" for the 48A simply by copying the 48's settings and adding the new signature when I must have messed something up.
Fast forward about 24 hours and I still don't know exactly what happened. Suddenly, rather than getting any device signature, my programmer was returning just Zeroes (0x00000000 to be exact) or sometimes zeroes with an odd number thrown in the middle.
I tried every possible debugging option I found online to come to the final conclusion that I must have busted the programmer. These things are designed to prevent overvoltage/overcurrent conditions, but I guess nobody's perfect.
It's also worth adding that I'm out of breadboard wire, so I've been using little scraps, and the only power supply I could find at that hour was a 4AA battery holder. You see, I tend to get into this mode where any sane person would give up and wait for a time when they have a clear mind and proper equipment, and I just continue to try more and more insane things as if one of them will miraculously work. It is entirely likely that some wires in this rat's nest of a bread board touched and messed something up.
I'm not entirely certain, but I have a hunch that there's a blown chip in my programmer. 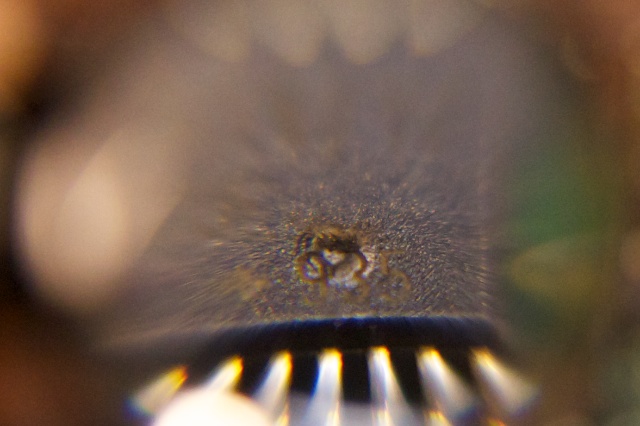 Looking this chip up, I found that it's a quad SPST switch (MAX4712) which probably blew up when I shorted something, though I'll never be quite sure.
Either way, I'm ordering another programmer ($35 down the drain), and hopefully, I'll be up and running by next weekend. I'm just hoping that that actually is the issue and I didn't just waste $35 to be stuck with the same problems.
Other news for today. I got my new soldering iron! 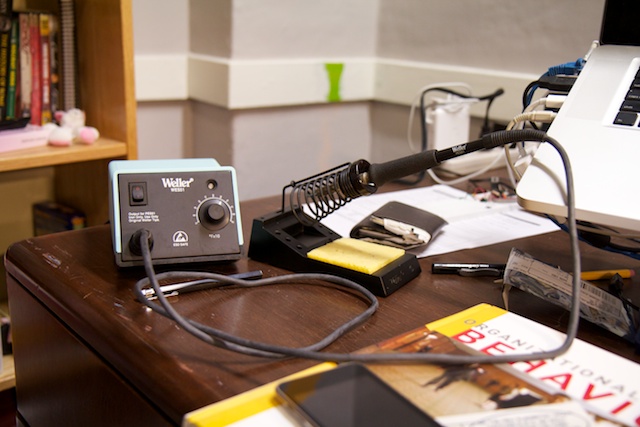 It's amazing to work with.
I also got my temp sensors, the breakout board, and the flux pen. I've never used solder flux before, but it really is amazing stuff. It sucks up solder like a vaccuum. Soldering the sensor was a piece of cake.

I also got my new tweezers.

I'm going to give it a rest for now until my programmer gets here. After all, I'm still waiting for a lot of parts, and I'm also doing this whole school thing too. Maybe I'll sleep some...

One thought on “A Nation of Frustration”