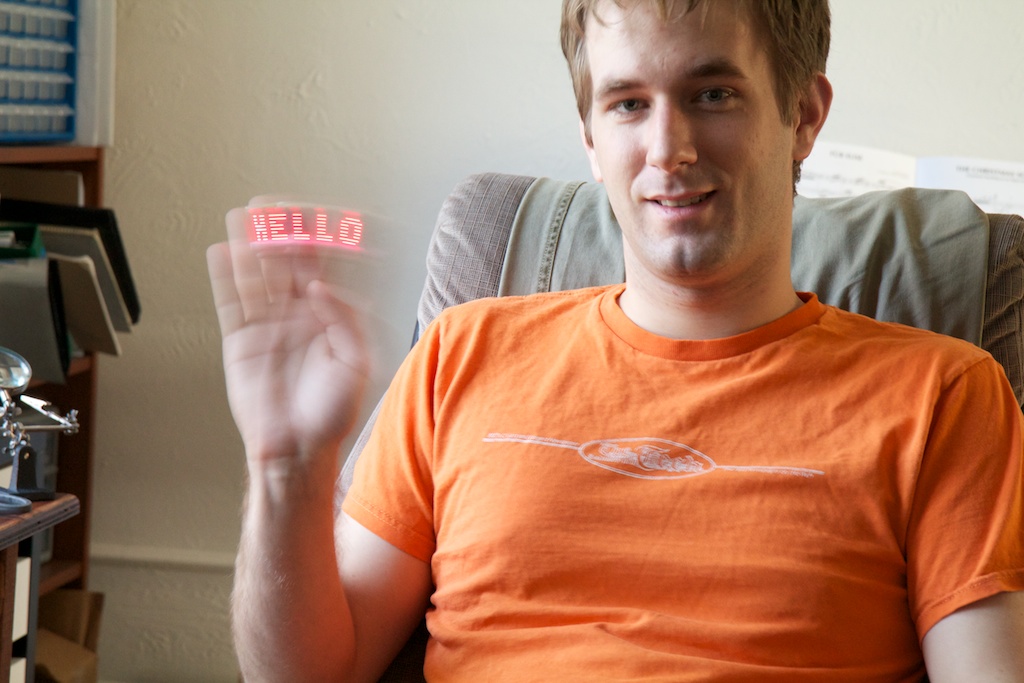 This is an idea I had a while back after making my persistence of vision toy.  Unlike that though, this thing had to be small and lightweight.  To accomplish this, I was going to need to etch my own PCB rather than using perfboard.  That’s what this was all about.  I’ll be providing a tutorial on that later. 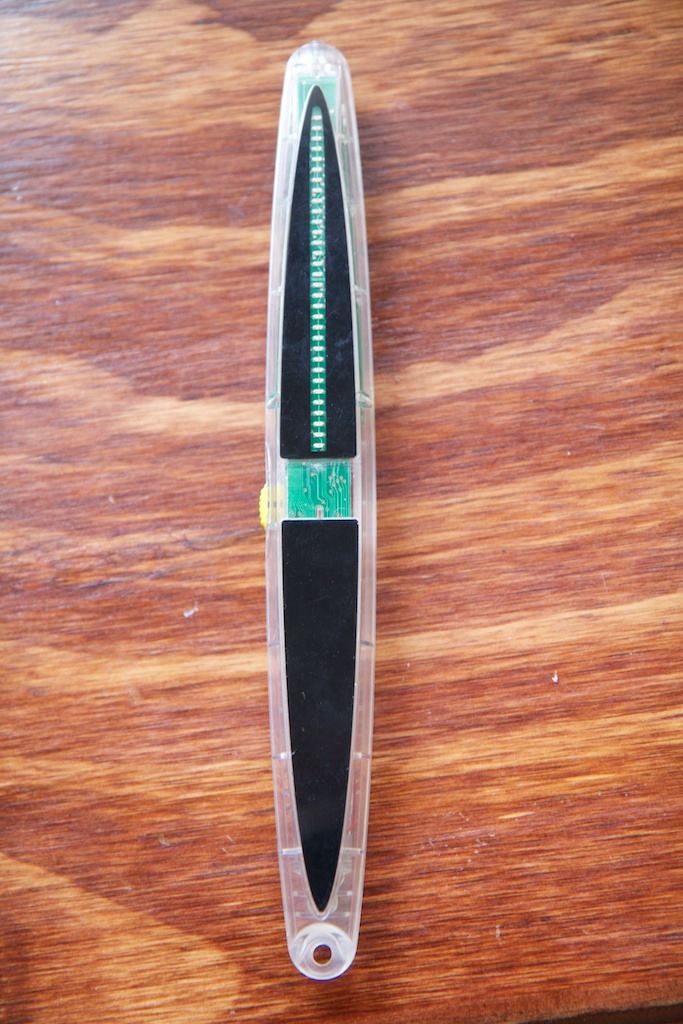 It’s a scanner/display which is actually pretty cool.  I don’t know who makes it, and I can’t find anything about it online, but they used to sell them on Thinkgeek.  The user can use the LEDs as a scanner to scan black and white images (using a technique that I will be trying out shorty) and then wave it back and forth to display the images in midair.

It looks like they just have a white marble that rolls around and a proximity sensor that detects when the marble is overhead.  This has several advantages over the accelerometer.  Namely, it doesn’t require any sort of signal processing.  The ball is either there, or it isn’t.

I wasn’t able to take a picture of this, but using a pair of night-vision goggles (what? they’re cool. Screw you guys), I could see that this proximity sensor was emitting infra-red light.  The sensor is basically an IR LED and an IR sensor.  When the IR light bounces off the marble, the sensor picks it up.

Same basic concept.  The channel is a plastic drinking straw from Chipotle (very important.  It won’t work if it’s not from Chipotle), the end stops are rolled up paper, and the “marble” is the shaft of a nylon screw wrapped in paper.  I had to cut a small window out of the bottom of the drinking straw, because even though it’s clear, it reflected enough IR light at that close a range to register on the sensor.

All together, here’s the gadget:

Once I got the firmware written, I wasn’t exactly pleased with the performance of the device.  My original plan was to have it paint “Hello” on the left-right swing and “olleH” on the right-left swing.  I quickly found that this was a bad idea as most people don’t wave exactly symmetrically and the letters rarely line up correctly (my reference toy also only “paints” in one direction likely for the same reason).

After fixing that, I still wasn’t very happy.  I noticed that discounting all of my timing issues, the start of the “H” wasn’t showing up in the same location every swing.  I quickly began to suspect my proximity sensor wasn’t firing properly.  I took a peek at the data sheet, and found this:

Turns out the sensor is actually pulsing it’s sensing ability (I actually noticed the IRLED blinking when I looked at it through my IR goggles).  What’s worse is this:

That middle number is the typical refresh time of the sensor.  90ms is nothing to scoff at.  Assuming I’m swinging at 3Hz, that’s only about 160ms per left-right swing.  What’s happening is that the sensor isn’t registering my swing until I’m part-way through with it!  What’s worse is that unless I’m swinging at a rate evenly divisible by 90ms, the “start of swing” will move around as time goes on.  What a pain!

If I swing slowly enough, the text stays reasonably still though.  I might be making another one using a better sensor in the future.  They sell sensors that are simply photodiodes and LEDs where you get to set the refresh rate yourself.  I’m pretty sure this is what my toy uses (it has four leads).  I’m still trying to figure out why there’s an entire class of blinking sensors. Perhaps pulsing the LED makes it more power efficient? Some of them have refresh rates up to 1MHz, but even the 200Hz sensors cost upwards of $30.

All in all, it was a fun project.  The hardest parts were etching the board and writing the firmware, and now that I’ve got all of that figured out, I can make another one with a better sensor in no time.  I’ll order some parts and try it again soon.

Here’s a video of it in action.  I used some Hollywood magic to approximate your persistence of vision using the “echo” effect.