A great man once said "If you're going to build a time machine into a car, why not do it with some style?"

Step 1 in making a Model S pinewood derby car was finding a digital model of a Model S. Hell if I was going to make one myself.  I found one on Thingiverse and imported it into Viacad.

Now, the thing about Pinewood derby car kits is that they have super weird proportions.  The blocks measure 30x45x175mm which makes them way narrower and way longer than just about any real car.  I got around this with the Lambo last year by using multiple kits to make the body of the car wider than the wheelbase, but I wasn't really up for all of that work this year and I still wanted a chance at getting under the 5oz weight limit.

So it was just a matter of shrinking the S down until it fit within the wood block. 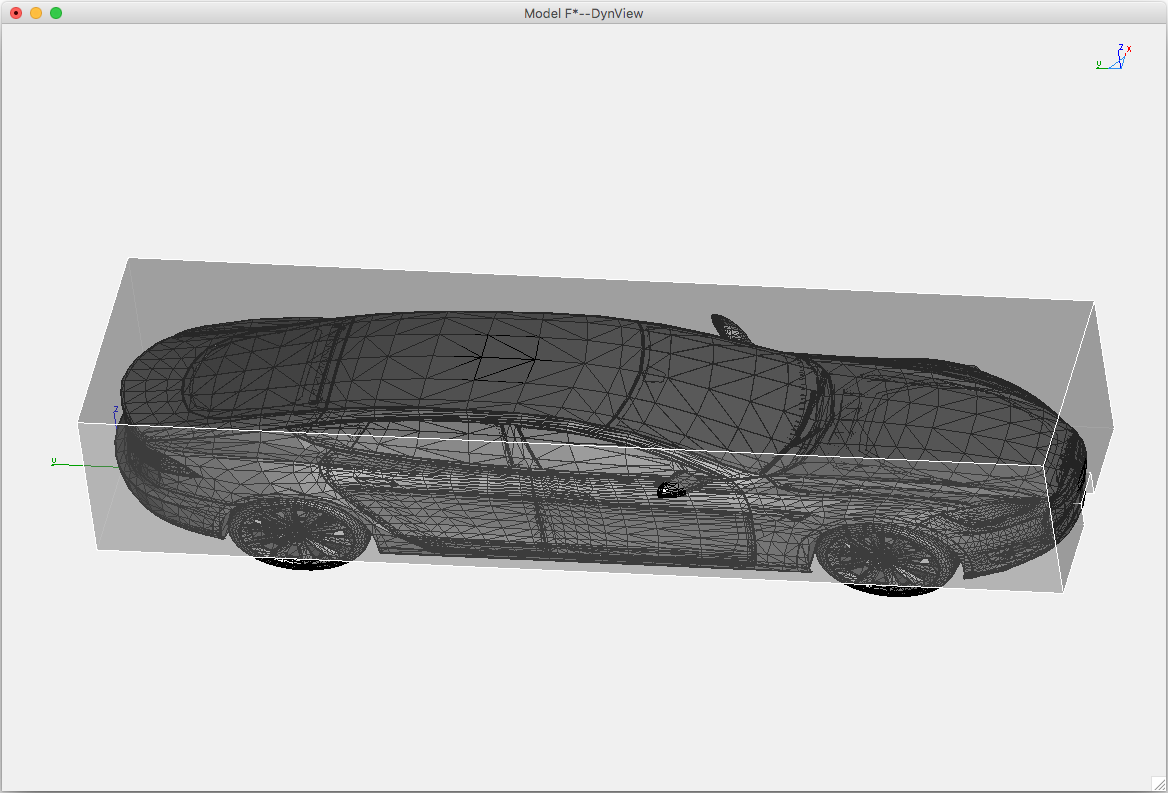 Elon's going to have to lose a few pounds if he wants to fit into this one.

Next up was fitting all of my stuff inside.  I built a simple 3D block model of my circuit board, motor coil, batteries, and front-facing sensor and placed them inside the car to see if they would fit: 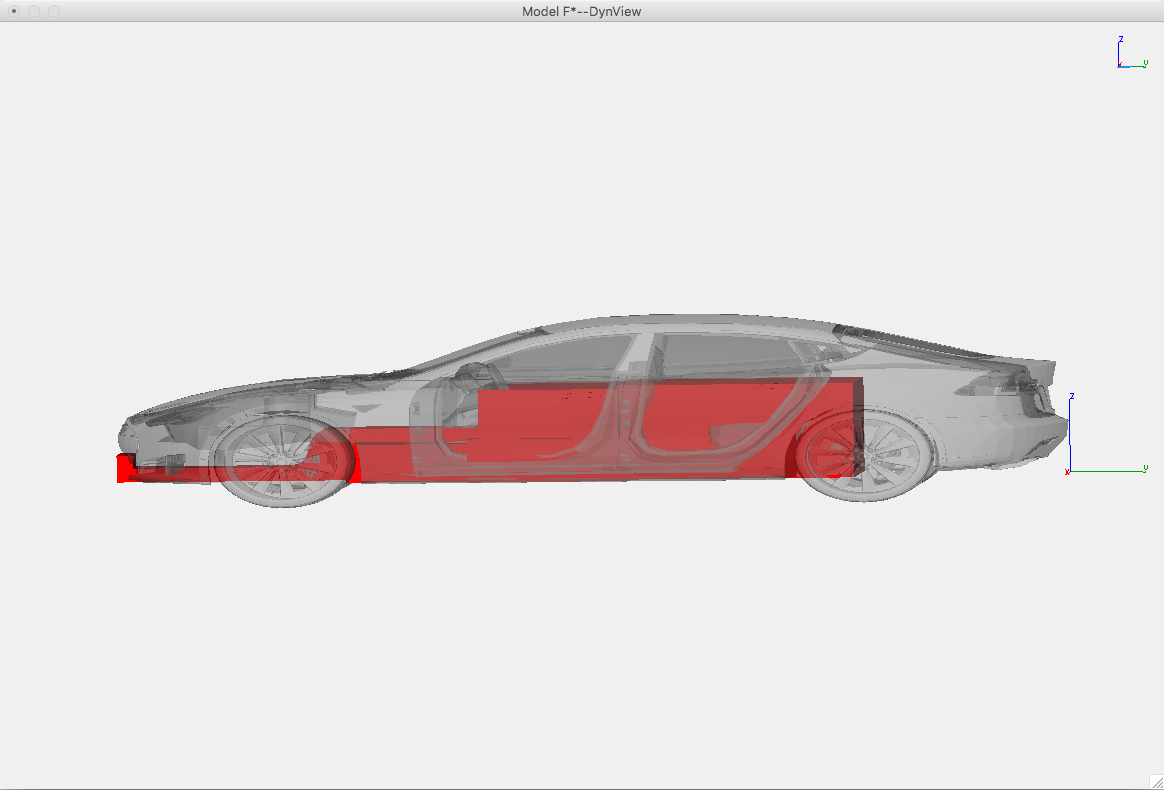 Subtracting the blocks from the original wood block gave me my first CNC job. 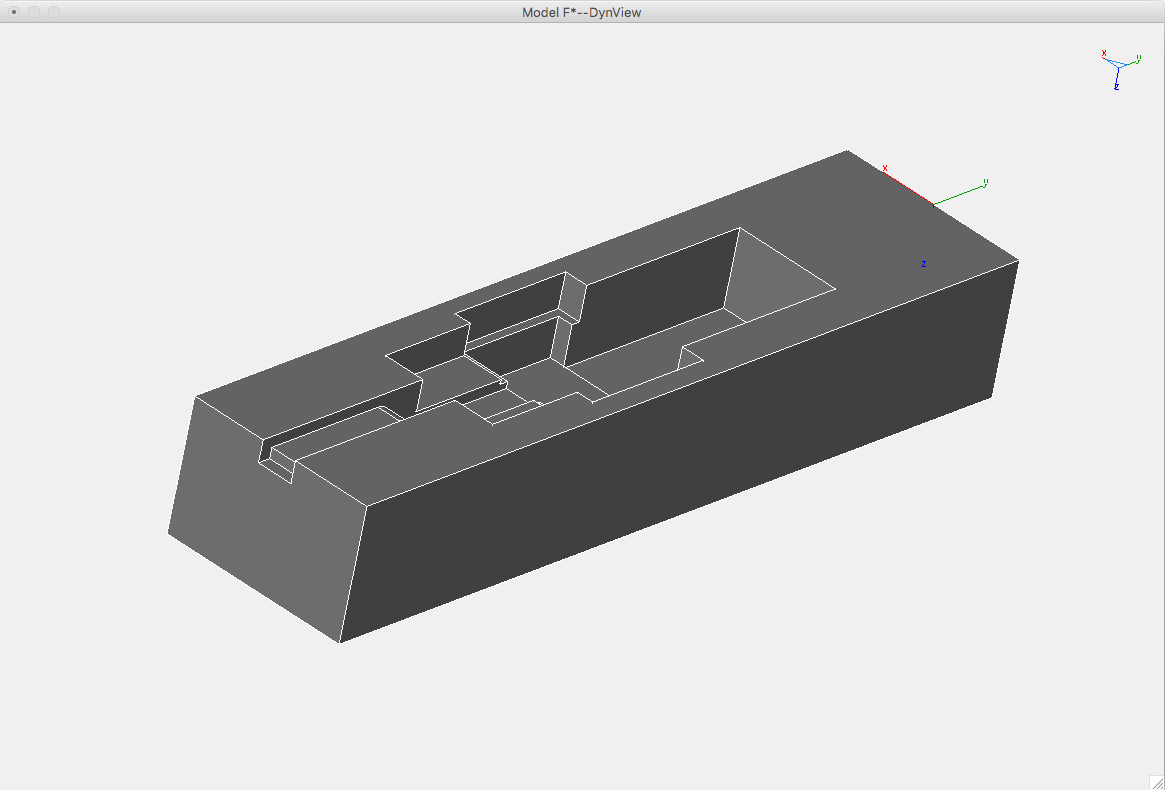 This was a pretty easy job for CamBam that used a 1/8" bit in a 3D profile task.

I somehow managed to get it about 1mm off-center which is a shame, but shouldn't affect the performance of my motor.  I did have to hand-modify the channel going to the optical sensor in the front to get it centered again, but it wasn't a big deal.

Next up was the top.

This job was performed with a 1/4" end mill with a 0.8mm step waterline rough job and a 0.1mm waterline smooth task.  You can read about the difference here.  Considering how the design didn't have any flat surfaces, I probably could have gotten away with just the smooth pass.

I had a little bit of trouble getting the smooth pass to work.  Firstly, I had to turn off "backface culling" because the "direction" of the Tesla 3D model was wrong (I have no idea what this means).  Secondly, for whatever reason, it took a LONG time to process.  Even with 16 gigs of ram and 6 processor cores, it took literally fifty minutes.  The strange thing is that it only ever used 17% of the processor and if I started another instance at the same time, it would take another 17%.

To fixture the block, I used some double sided tape, and resorted to using a bit of wood glue on the corners when the block started to lift up early in the job.  Either way, I was super paranoid that it was going to move and get ruined, so I ended up holding the block down with a nervous finger for almost the entire two hours... 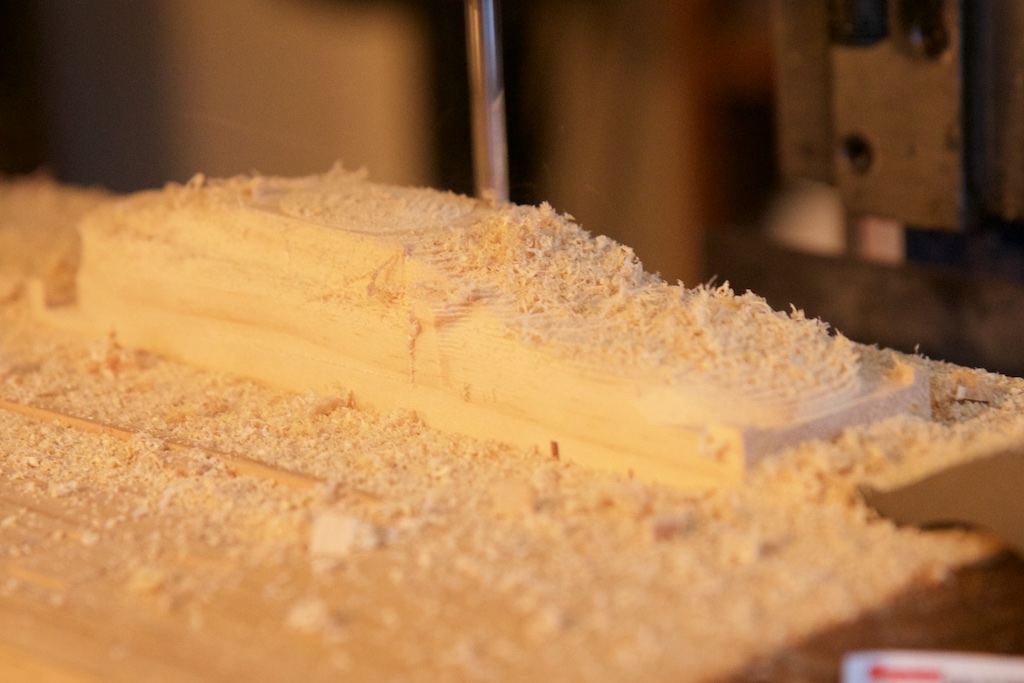 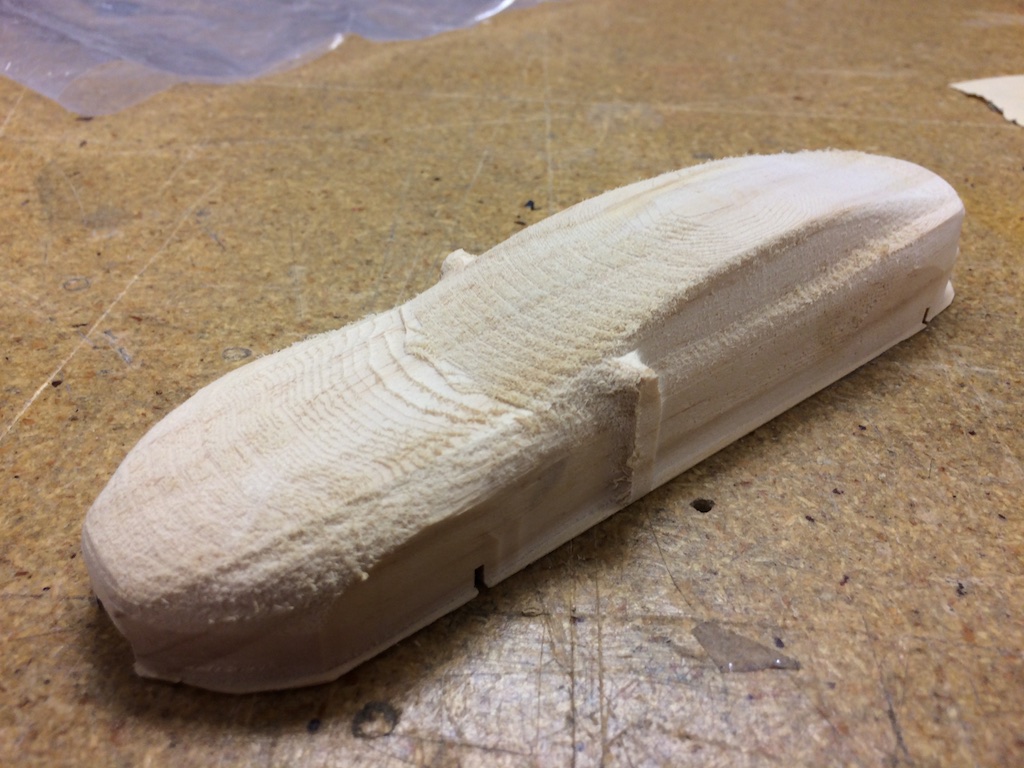 As you can see, the 3-axis CNC mill is incapable of cutting under things, so the mirrors have a "shadow" underneath them.  This was actually beneficial because modifying STL files with Viacad is a nightmare, and I needed a flat surface under the wheel wells to mount the pinewood derby wheels where the Model S wheels would have been.

Carefully using a square-end X-acto blade, I carved out the space under the mirrors, rounded the nose, and cut out a little of the rear bumper.  That and a hell of a lot of sanding gave me this: 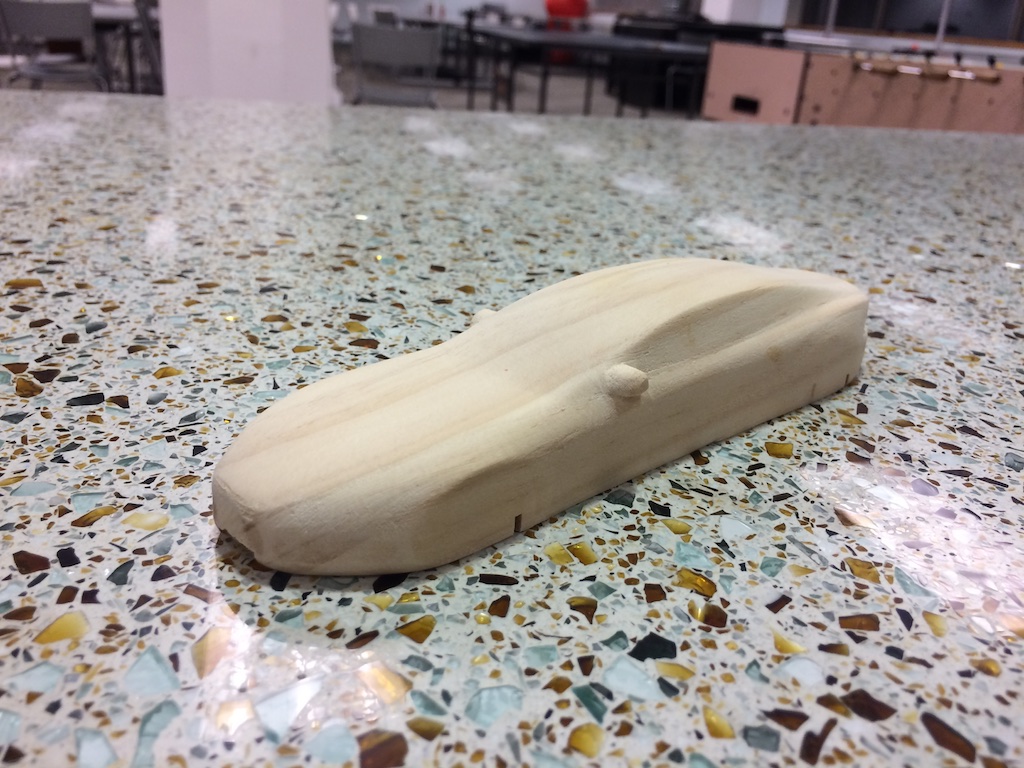 I was actually super surprised at how much it already looked like a Model S.  You'll note that the axle holes aren't in the right spots.  I spent a lot of time trying to get this to line up in last year's car, but this year I opted to just use a sweet axle hole driller tool.

Next up was paint.  First step, about five layers of acrylic Krylon spray paint: 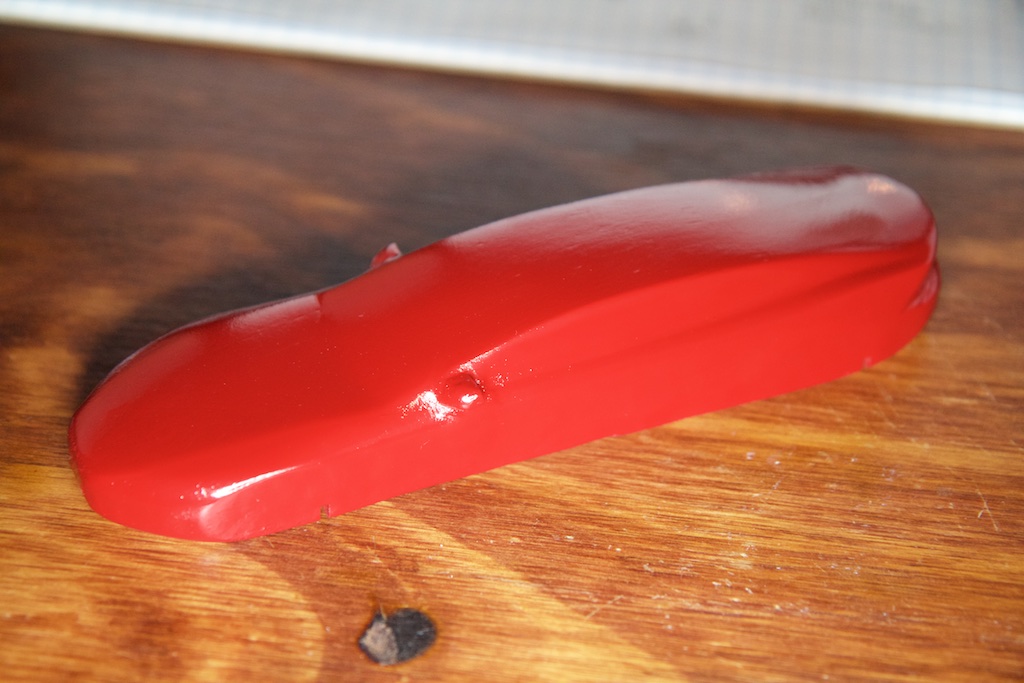 I forgot to buy primer, so I needed a lot of coats.

Then it was time to add some details.  I bought a few colors of acrylic paint from a local art store and set to work: 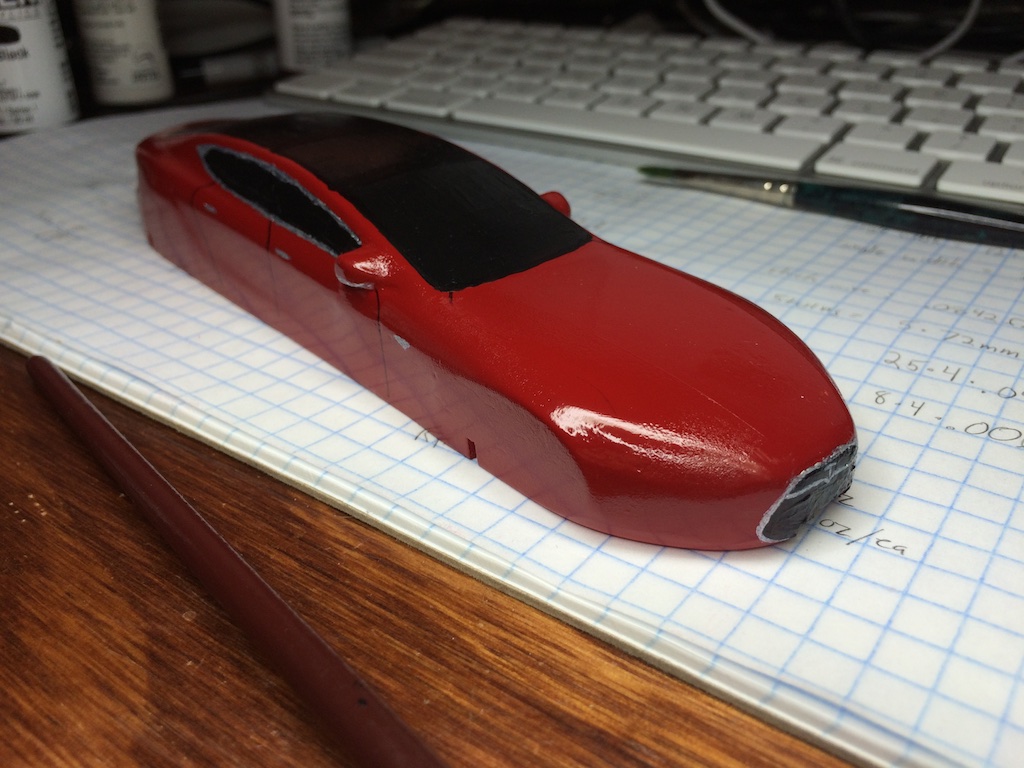 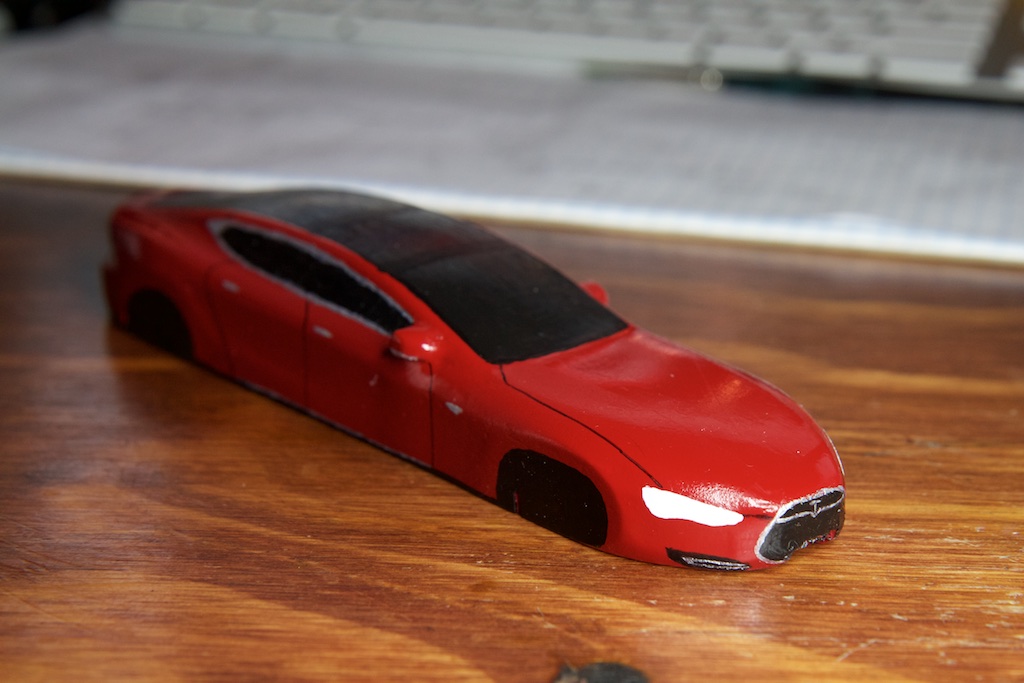 I used glossy black paint for the windows, and matte black to add the sunroof cross-beams.  The frunk/trunk/door seams were drawn carefully with ultra fine point sharpie.  I messed up at one point and had to sand the sharpie off and carefully mask and repaint.  It's still a little visible, but not too bad.

Next up, it was time to add the electronics.

In order for my car to be mobile, I needed some batteries.

I found a big box of of Fullriver 661723HS25C batteries which are small, have a capacity of 160mAh, and are rated for 40C discharge (6.4A) for under 5 seconds of operation.  They also didn't have any protection circuitry on them, but I figured that if my car burst into flames halfway down the track, it would totally be worth it.

I had absolutely no plan to build a charger into my car at any point, so I manually charged a few with a power supply: 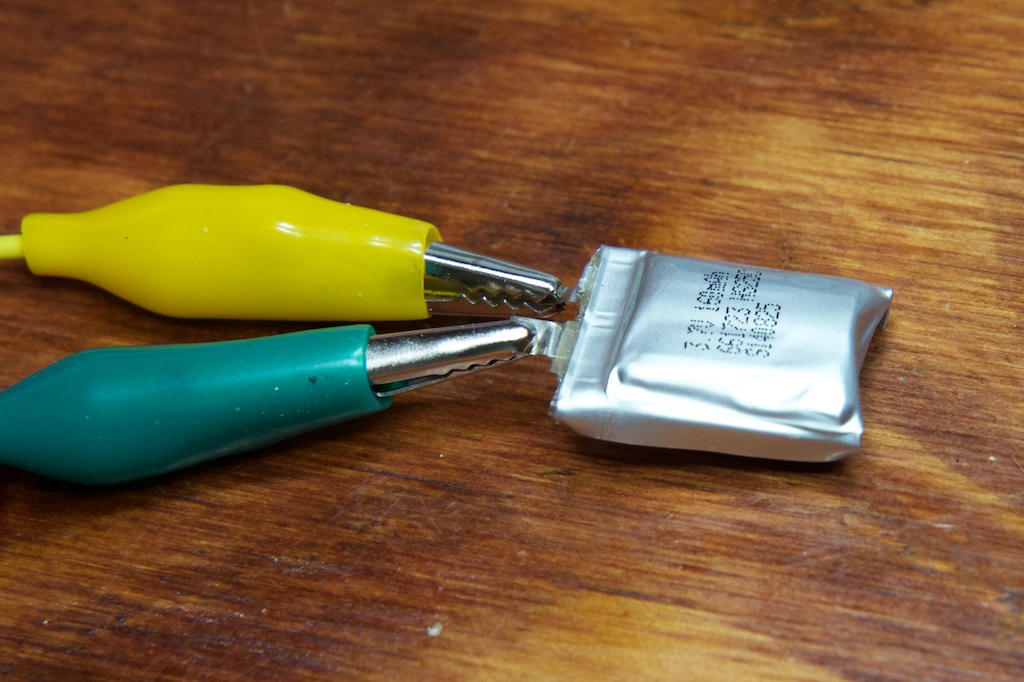 Charging slows down as batteries approach 4.2V, so I impatiently stopped them at about 4V.  Next up, soldering them together:

I originally planned to use six cells, but I had a bit of trouble getting all six to fit into the cutout I made in the car. Also, I had reworked  a 100uF 25V electrolytic bulk cap to the power rails of my circuit (not pictured), and I was a little nervous about taking it within a volt of its rated limit.  Five cells brought me down to 20V.

Then after nervously drilling and adding the wheels and electronics: 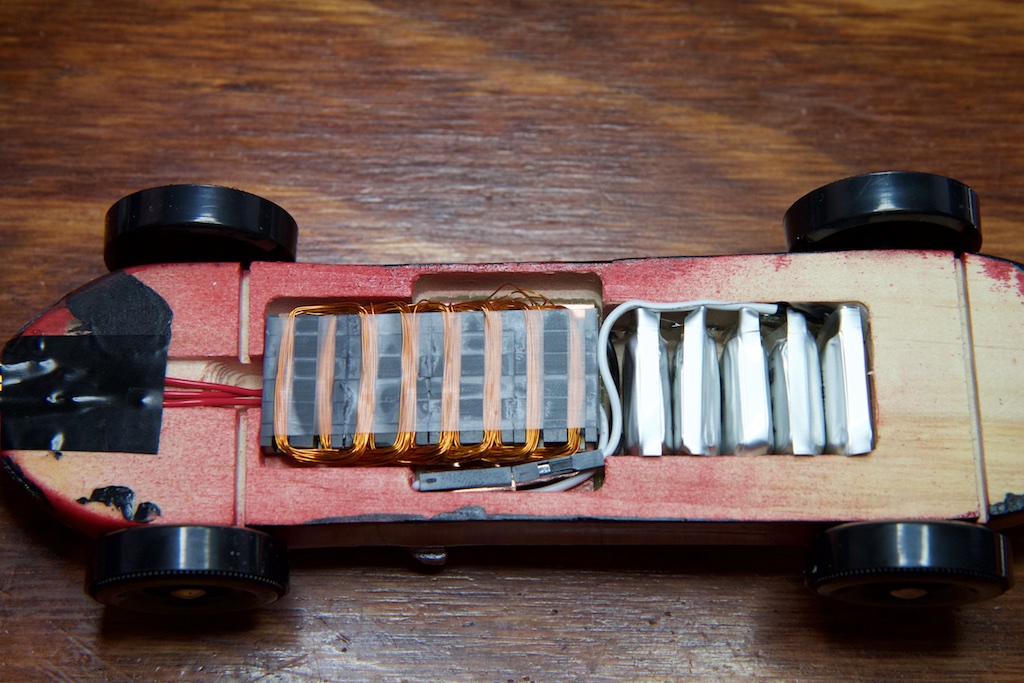 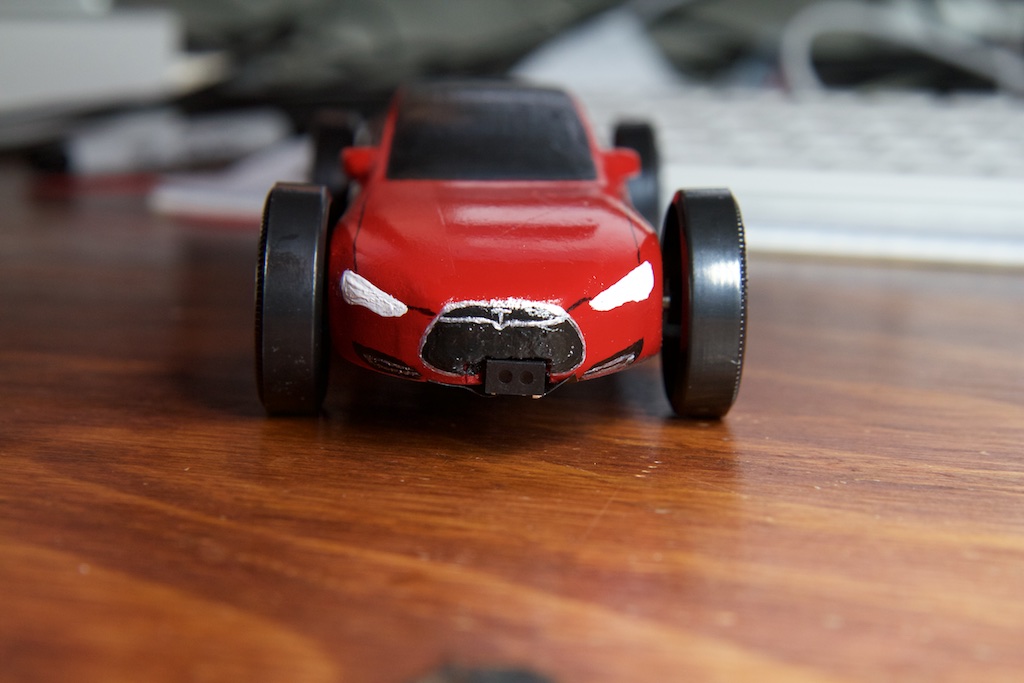 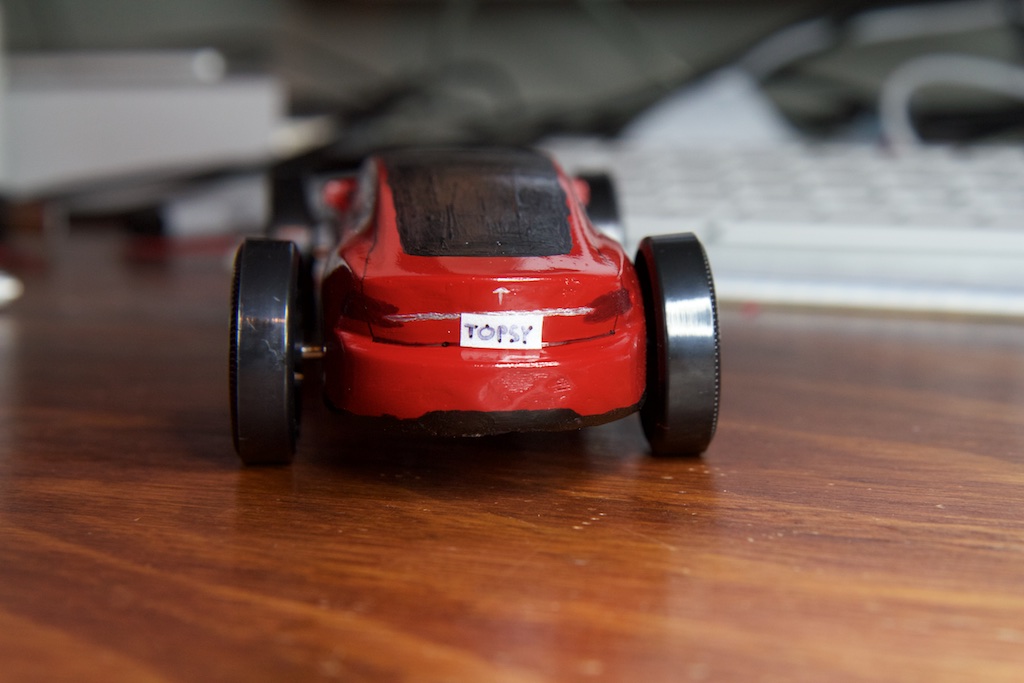 The license plate was made from actual retro-reflective tape.

The best part is that I came in under the 5oz limit! 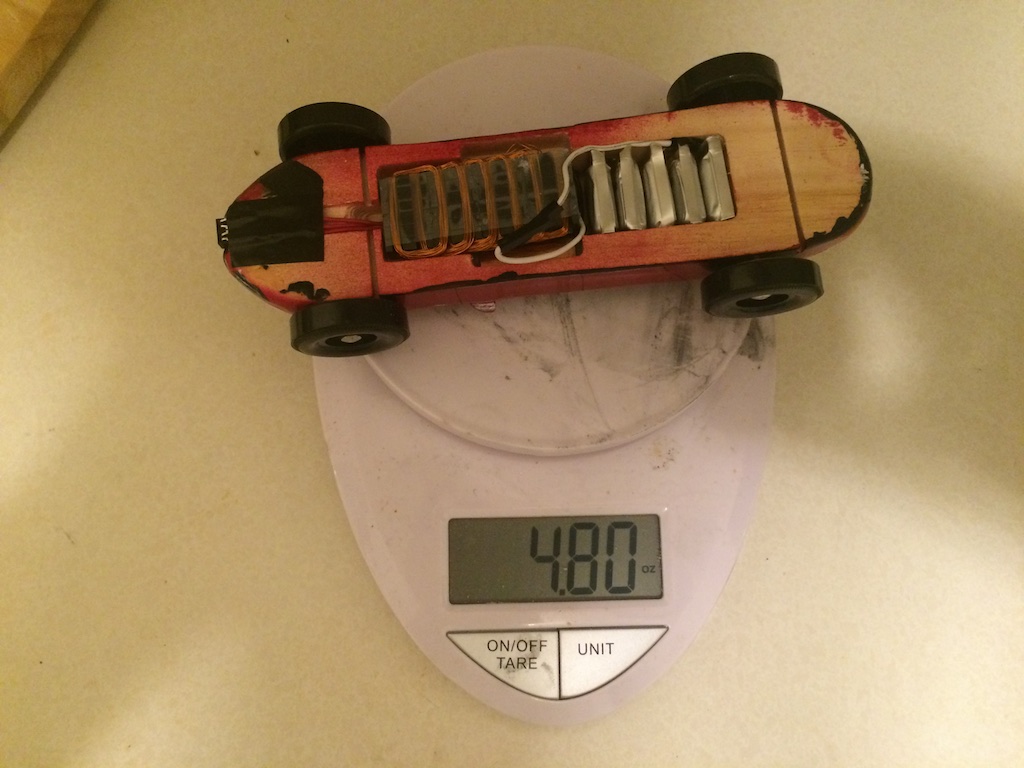