So, this is a project that was nearly a month in the making.  I set out to make a sound-reactive EL panel but found that driving EL in such a way is actually kind of difficult.  If you've been following the blog, I've been working on this project in one way or another since my transformers article, and it's actually the reason I wrote that article.

Again, a disclaimer. There are over 8,000 words in this post that document all of my design decisions on this project.  It is not a how-to guide, but if you have some background in EE, I hope that you gain something from it.

Without further ado, let's get down to business.

So, it turns out that my electrical model of the EL panel was completely wrong, so this post had to be heavily edited.  There are some issues with the design presented here.  The circuit being demonstrated in the video above "works", but not as well as I would like.  If you plan on actually creating your own EL panel driver, I recommend reading this post in conjunction with this post.

Otherwise, this post contains tons of useful information on designing and building an H-bridge with a DC-DC switching flyback converter to step 6V up to 120V and drive a 56k

load.  It also contains a few EL panel details that are actually correct.  Since writing, I have attempted to remove all of the erroneous information.

If you want to see an EL dimmer that actually works, I recommend starting here.

The Problem With EL

EL materials (wire, tape, panels) are an odd bunch.  No matter where you look, EL panels seem to be always be made very cheaply and with very little documentation.  There doesn't seem to be any "pro" version of the stuff.

Also, because it is primarily used in costume design (and not real lighting applications), there are very few Electrical Engineers tackling the issue of powering/controlling it.  As a result, you get some hilariously bad attempts at doing cool stuff with EL.  My personal favorite is this one where a blogger discovered that blue EL wire turns greenish at lower frequencies.  I'll spare the details of the issues with his design, but this excerpt should tell you everything: "Please note that many audio transformers are potted with a low melting point wax and can get warm enough to leak and fill the holes of your breadboard!" (It's great that he's experimenting around, but when that's one of the better resources out there, that's a problem for rising hobbyists).

So my goal with this project was to try to exert more sophisticated control over EL materials.  So far, everyone can seem to make EL blink fairly easily (like this asshole), but if I know my electronics, fancy gadgets don't have blinking lights, they have pulsing lights that fade in and out gradually. This is usually because blinking a light is much simpler than dimming one.

So I want to make a dimming EL panel driver.  And what the hell, let's make it react to sound too.

So, this design originally started as a commissioned piece from a guitarist who wanted something cool to wear at concerts.  He didn't have any ideas of his own, so I cooked something up for him: 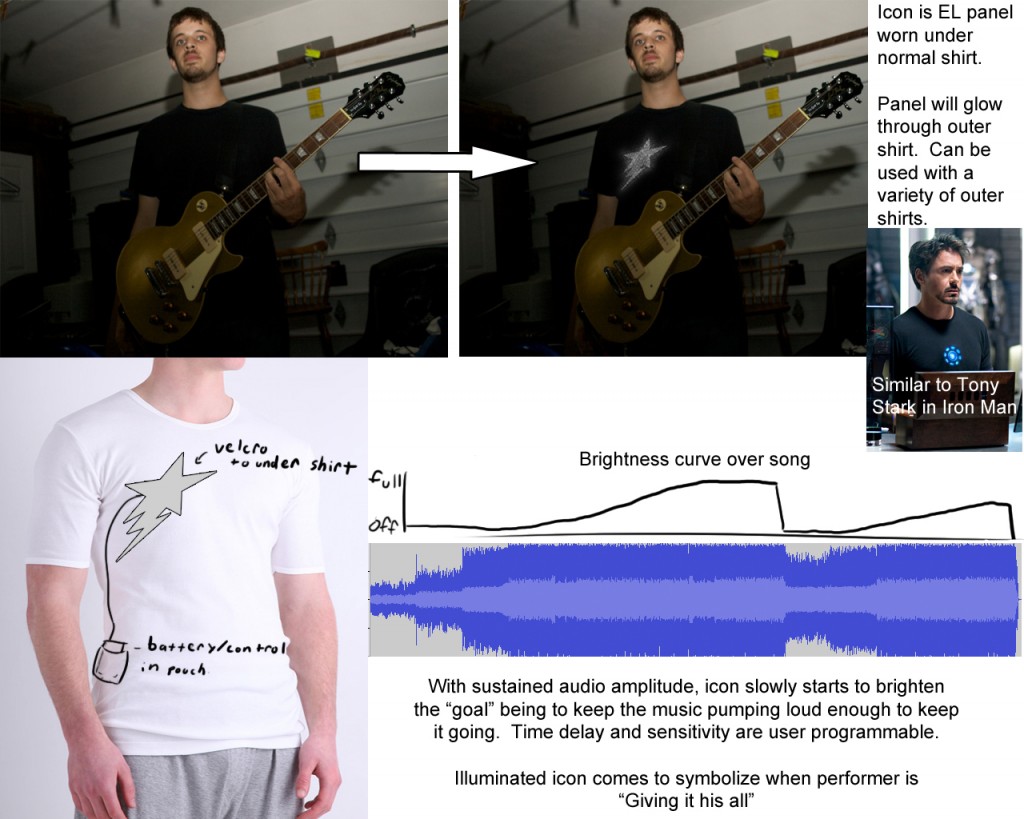 Basically, the idea was to have an EL panel under his shirt that would pulse and light up to music.  All of the "brightness curve over song" stuff ended up flying out the window during the project, but seeing how that would all be controlled by the on board micro controller, it didn't really matter as I could change it at any point.

So I needed a small battery powered EL panel driver that could pulse and dim the panel by software control.

I purchased this panel.  It's exactly half the size of a standard sheet of printer paper. 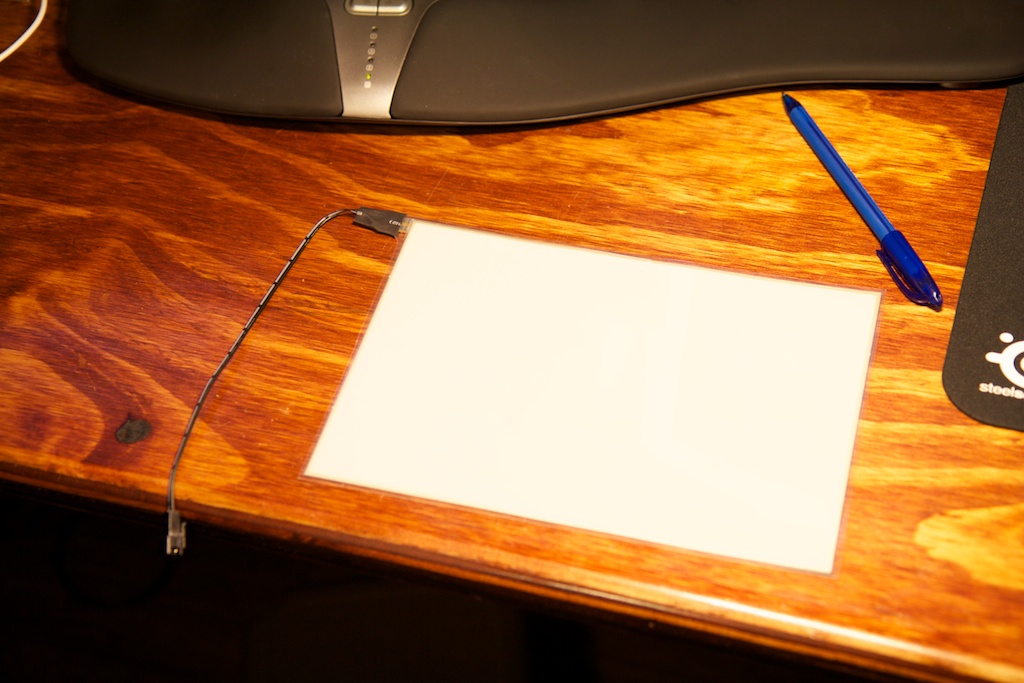 Just for fun, I tried plugging the panel into one of my standard EL wire drivers and found that it completely failed to light up.  I guess the panel provides too big of a load for the puny wire driver.

Interestingly you can get a faint glow by plugging it straight into a 120V socket.

So as you might recall, EL wire is powered by a high voltage (120 or so) AC waveform at a few kHz.  Nobody on the internet seems to know exactly how this works.  The best that I found was this video by the lovely Jeri Ellsworth (who I might kind of have a crush on at this point).  It would seem that the changing of direction of the electric field is what causes the EL to glow.  It isn't exactly important that it gets fed a sine wave; a square wave of similar frequency might also do the trick.

When I originally wrote this article, I had a long description of what I believed to be the correct electrical model for EL materials.  I have since found this model to be wrong and removed it.  For the purpose of this discussion, all you need to know is that an EL panel looks sort of like a capacitor.  For more details, check out this post.

So, given this information, I would guess that every time the electric field alternates, a small pulse of light is given off.  At higher frequencies, more pulses of light are given off in a given time period giving you an overall brighter appearance.  The pulse brightness is proportional to the magnitude of the voltage at which you are driving it, but there is a minimum voltage required to get it to light up at all.

But there is a upper threshold on how bright EL can get.  Drive at too low a frequency, and you don't get enough light pulses per second, but drive too fast and its capacitance won't have a chance to charge up to full voltage.  The capacitor voltage will eventually drop below the minimum threshold and your EL won't light up at all.

I also found this PDF data sheet that confirms this.  It isn't for the EL panel that I purchased, but it should at least give some ideas about EL panels as a whole.  On the top of page 3, it says "Brightness increases with higher frequency up to 1000Hz".  This also helped to confirm for me that apparently EL panels don't get driven at quite as high of frequency as EL wire (1kHz vs 3kHz).

So, it would seem that I simply need to find a way to vary the driving frequency in order to vary the brightness.  The only problem is that I also need to keep the voltage of my waveform constant.  This complicates things as just about every single EL wire/panel driver circuit out there uses a resonant driver which doesn't really give you options for variable frequencies.

I could have also just tried using a standard step-up transformer and driving it with a square wave, but this also presented a problem as I would need to have the ability to drop the frequency down to as low as 60Hz.  Remember that a transformer is kind of like an inductor which carries the following formula.

Which can be manipulated to give:

is much larger.  To keep the current (

) from ramping up too much (and making resistive losses a bigger deal),

must be increased a lot.  This will result in a very bulky transformer as you will need a lot of windings and a large core to get a very high inductance.

Because I've decided to drive my EL panel with a square wave, there might be a much easier way to do this.